What needs to change in Game 2? Here are some thoughts… 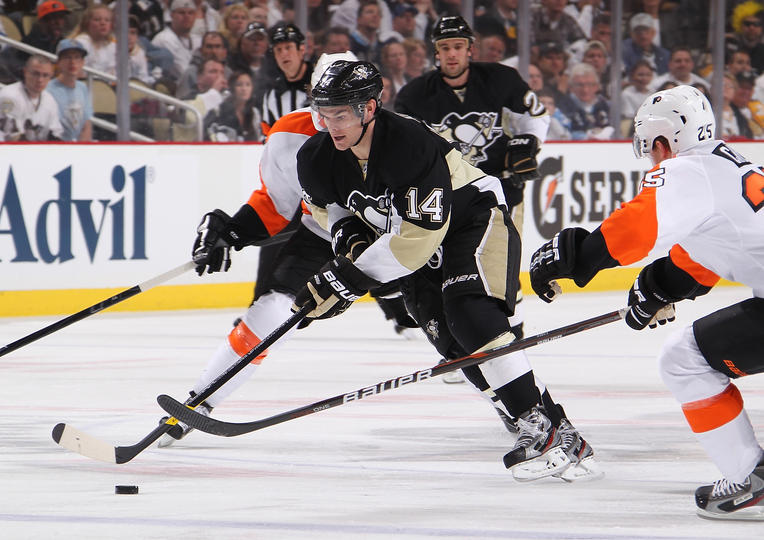 (The Metallica Soundtrack is sprinkled throughout! – it is’t very extensive today. There is also a playlist at the bottom)

Starting on Jan. 13 and continuing through early March, the Penguins looked invincible. They looked like they would have no trouble catching the New York Rangers for the top spot in the conference and like a team that would easily roll through the Eastern Conference playoff field.

Unfortunately they started to show some weaknesses towards the end of that dominant stretch – uncharacteristic defensive lapses, failing to possess the puck as often as Dan Bylsma’s system requires, mental lapses and an inability to cash in on the power play to name just a few. It all didn’t matter too much at the time, as the team was still finding ways to win games.

Then came a stretch of play that saw the Birds drop a game to the Ottawa Senators and two to the New York Islanders, all of which were what can politely be called winnable outings. The Sens and Isles outworked the Penguins in all three zones, exposed holes in the Penguins defense and potentially showed the rest of the East that the Penguins could be had by utilizing speed to get behind their defense.

The Penguins pulled themselves together and picked up a couple of huge victories over the New York Rangers and their first round opponents the Philadelphia Flyers, which led many to believe that they had put their problems behind them.

Enter Game 1 on Wednesday night and that confidence grew when the Penguins leaped out to a 3-0 first period lead. The Penguins were outskating the Flyers, they were shooting from all over the ice, possessing the puck and throwing around the body… unfortunately, it all ended when the horn sounded to signal the end of the first period.

You know what happened the rest of the way, so I won’t bore you with the details, but I will ask: What do the Penguins need to do to right the ship this evening?

For one, they need to get a better showing out of their power play. They were given three opportunities with the extra man on Wednesday night and did absolutely nothing with them. Heck, they were rarely able to get set up in the Flyers zone, let alone score any goals.

The team is set to utilize Steve Sullivan on the point this evening, which is a role that he thrived in this season. He is skilled at retrieving the puck and penetrating the offensive zone. That alone should help the cause. It also sounds as if Dan Bylsma is willing to slide Sidney Crosby back into a role down near the goal line and to potentially utilize Evgeni Malkin up high so as to utilize his booming shot.

Next the Penguins have got to ensure that they all are willing to play for a full 60 minutes. They cannot take shifts off and need to stay physical with the Flyers defense. When they were hitting the Flyers defenders during the first period, they were creating turnovers in the offensive zone and with them… scoring chances.

They have also got to shoot the puck more often. 15 shots over the final 44 minutes on Wednesday night were unacceptable. The team has been trying for the “tic-tac-toe” plays far too often since Sidney Crosby returned to the line-up and that mentality has got to go. It is something that happens to teams with many talented players in the fold. They overpass looking to set up a jawdropper instead of just shooting the puck.

The bad thing is that it also encourages guys of lesser skill to do the same thing and you see things like a 2-on-1 with Arron Asham and Craig Adams and they force a pass rather than just get the puck to the net.

Based on the attitudes in the Penguins’ room today and the words that were being said, it seems that the players have “gotten the dirt” off of their collective shoulders and are ready to bounce back this evening. It will be interesting to see how they respond after one of the of the worst playoffs losses in recent history.

“I get more fired up being on the road. To ruin a city’s night like tonight here in Pittsburgh for Game 2, we’d love to send everybody home wondering what happened to their home team.“