The Penguins and Canadiens took the ice at Mellon Arena this morning and there are a couple of interesting scenarios to report. 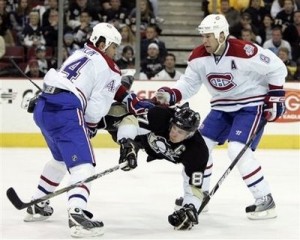 The Penguins and Canadiens took the ice at Mellon Arena this morning and there are a couple of interesting scenarios to report. Probably the most intriguing is the fact that Alexei Ponikarovsky might be a healthy scratch for the Penguins this evening.

Ponikarovsky has not necessarily lived up to expectations after arriving in Pittsburgh at this season’s trade deadline. After picking up 9 points (2G-7A) in his first 12 games as a Penguin he has gone ice cold. The native of Kiev has only notched 4 points (1G-3A) in the 14 games since, including 10 playoff games. He hasn’t been able to find chemistry with Evgeni Malkin as many thought he would and found himself demoted to the fourth line in the Game 4.

Ponikarovsky skated with the extras during this morning’s skate and the fact that Bill Guerin is expected back could push him to the bench. Mike Rupp is also close to returning and will be a coaches decision this evening.

Guerin, who has 8 points (3G-5A) in 8 playoff games this season is excited to get back in there and anxious to contribute.

“I just want to keep playing that way that we have been playing,” Guerin said following today’s skate.  “I want to drive to the net and get in front. Just like everybody else, I want to play well in our own end and just contribute. We’re playing a solid team game right now, and there’s no reason for us to change anything. I’m just going to try to pick up where I left off.”

He will move right back into his spot alongside Sidney Crosby and Chris Kunitz.

The other lines for this morning’s skate were:

As you can see, Ruslan Fedotenko was also left off of the top four lines. Having he and Ponikarovsky out would be leaving a ton of money on the bench, but it proves once again that Dan Bylsma is not afraid to go with the guys who he feels gives him the best chance at victory. He wasn’t afraid to bench Petr Sykora last season and he isn’t afraid to bench these two high profile wingers.

It is worth noting that the official line-up has not been announced, but the morning skate is usually very telling.

On the Montreal side of things, the Canadiens surprised everyone by having Andrei Markov travel to town with them, but Jacques Martin said it was just so that he could continue to rehab with the team’s medical personnel.

“Andrei, and the same with Paul Mara, we have all our medical staff traveling in the playoffs,” said Martin. “There is nobody behind. So to continue treatments, that’s why he’s on the trip.”

The only other news of not surrounding the Canadiens was the fact that Jaro Spacek is getting closer to making his return. It is expected that he will again be out of the line-up tonight, but could play soon.

As usual, I will be live at Mellon Arena… look for more later.

You can read my game preview of Game 5 over at Versus.com here.