Well, most involved in this series didn’t want it to come down to this, at least as far as those on the Penguins side of things go. 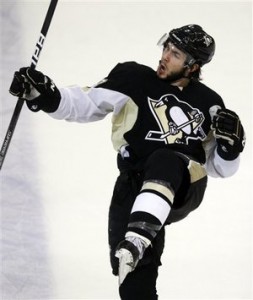 Well, most involved in this series didn’t want it to come down to this, at least as far as those on the Penguins side of things go. However, circumstances and an untimely loss for the Penguins in Game 6 Monday evening have put them squarely in the shoes of the Washington Capitals.

Sure, this series has resembled that first round affair between the Canadiens and Capitals, but the Penguins were the kings of making adjustments on the fly. They were going to solve the Canadiens stifling defense and breeze into the Eastern Conference Final… no good, never happen… and that’s why they actually play the games.

You see, the Canadiens have become the master agitators. They have shown the ability to frustrate star players in a way that I haven’t seen in ages…couple that with their ability to score plenty of goals on the very few chances that they actually get and you have a recipe for a Game 7 disaster.

Both of these teams are heading into tonight’s Game 7 with confidence, as both have shown an ability to win them. The Penguins took two of them last season en route to their third Stanley Cup Championship, while the Canadiens are fresh off of their first round upset of the top seeded Capitals.

There really are no surprises on the table tonight… I don’t think that it would be much of a shock to see either team win this one. How could it be… the Penguins are the team that was “supposed” to advance when this thing started, while the Canadiens have walked through fire all playoffs long and have come out unscathed more times than not.

The two teams took the ice this morning at Mellon Arena and both seem to be tinkering with their personnel. The Canadiens due to getting some bodies healthy and the Penguins just to maybe get a different look.

First of all, Hal Gill participated in the morning skate for the Canadiens and is expected to take part in tonight’s affair. Gill has been a huge part of the Canadiens’ success through the first two rounds of these playoffs and I am sure that he will be at his tormenting best tonight.

Andrei Markov again took to the ice, but it doesn’t seem as if he is going to be able to go this evening. To be honest, I am surprised that they have even trotted him out for the light sessions that he has taken.

It also looks as if the Canadiens will be dressing seven defensemen — the six from Game 6 as well as Gill.

On the Penguins side, it appears as if Alexei Ponikarovsky will get back in the line-up after being held out of the last two games. The Penguins’ marquee trade acquisition has been ice cold as of late and has only 4 points in his last 14 games leading back to the regular season. He skated this morning on a line with Evgeni Malkin and Bill Guerin. It seems as if the casualty will be Mark Letestu.

If there was ever a time for Poni to get it going, it is tonight. He is not only playing for the Penguins playoff lives, but for a contract next season. He should have something to prove and I think that will motivate him to play like the player the Penguins thought they were getting at this year’s trade deadline.

There is also some speculation that the Penguins could get Jay McKee back in the line-up tonight. Mckee has been out since Game 1 of this series, but was very effective when given the opportunity to play. If he were to get in the line-up, conventional wisdom speaks to the fact that it would be Jordan Leopold coming out.

Personally, I am not a fan of tinkering with your line-up in a situation like this one; however these two moves could help the cause. Mckee’s defensive style will help control the Canadiens and their ability to create offense off of the rush, plus he isn’t shy about blocking shots.

The Penguins forward combos shook out as such:

The above combos skated together this morning, though I fully expect Dan Bylsma to hit the Canadiens with a healthy dose of Malkin and Crosby. I would also expect to see that duo double shifting in an attempt to get one or both of them away from Hal Gill and Josh Gorges. 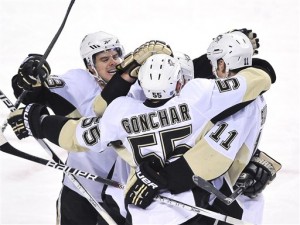 This evening is going to come down to which team gets better goaltending and is able to win the special team’s match up. Game 1 aside, every game has been a tightly contested affair that was hanging in the balance until the final moments.

Though this game will be a nerve wracking one, you can’t ask for anything more as a hockey fan. Game 7 is what we all watch and why these guys play.

I will be live at Mellon Arena this evening and hosting a live chat for Versus.com. If you are unable to get in the building or down to the screen, please join in the Playoff chat. We always have a great time and you never know who is going to swing by!

Though this one happened on the road… something about the frustration I feel in this series reminds me of the same feelings I had against Buffalo in 2001. The results were pretty good on that night.

Ten Songs To Pump the Boys Up: