Considering that the Penguins won the game and I already banged out 2,600 words of good and bad during the “live game” blog, I will utilize this space to share some positive thoughts on the day… 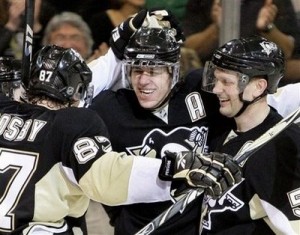 It wasn’t pretty, but the Penguins found a way to pick up two points against a very desperate Atlanta Thrashers team.

The Thrashers very well could have won this game, especially based on the performance of their goaltender Johan Hedberg. Hedberg played an outstanding game for his team, especially the second period, in which he only made 8 saves but they were all huge. At one point it seemed as if he made 15 saves during a two shift flurry by the Penguins.

It was refreshing to see a 60 minute effort out of the Penguins today, but they have got to tighten up defensively. They allowed the Thrashers to have too much space, especially coming through the neutral zone. If that is the Washington Capitals, as it will be on Tuesday night, they will be beaten for more than the three goals they allowed tonight.

All of that aside, considering that they won the game and I already banged out 2,600 words of good and bad during the “live game” blog, I will utilize this space to share some positive thoughts on the day…

First of all, Sidney Crosby had another big day for his team. The Penguins captain picked up 3 assists and is now just 3 points from reaching the century mark. He probably could have had even more today, but there were several missed opportunities by linemates and even more great saves by Hedberg. Crosby didn’t have his best stuff in the face-off circle, but he did win some huge draws when he needed to. He was a maniac on the puck and did everything in his power to keep the puck deep in the offensive zone on each of his shifts.

Evgeni Malkin was back in the line-up this afternoon and made an immediate impact. The power play looked livelier that it has in many games and Malkin cashed in with the extra man. He was back to his old ways of galloping through the neutral zone, backing off opposing defenders and creating opportunities for himself and linemates. He finished the day with a goal, an assist and four shots on goal.

We can’t mention Malkin and his impact on the power play without talking about the return of Sergei Gonchar, who probably had just as much influence. Sarge showed a bit of rust early, but quickly settled back into his role as power play QB. He picked up a goal, an assist and played close to 23 minutes. Games like this afternoon show why Gonchar is one of the most important pieces for the Penguins.

Jordan Leopold has been great for the Penguins since arriving. He is able to play multiple roles for the team and give Dan Bylsma some options. He is very mobile, has good vision and has a nice shot from the point. He finally picked up his first goal as a Penguin and it was a huge one. He fired a quick shot from the right wing boards that beat Hedberg in overtime to give the Penguins the victory. Leopold finished the game even, with a goal and four shots on net. 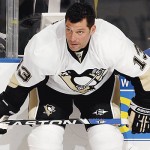 Bill Guerin might not be getting it done on the scoresheet right now, but he has been doing a lot of things to lead this group. He brought a ton of emotion to the rink this afternoon and fought for the second game in a row. Guerin has been one of the most vocal players in the Penguins room, saying that the group has got to prepare better, get more focused and work a bit harder with the playoffs approaching.

As I said above, it wasn’t a perfect victory, but there were glimmers of what could happen when this team is playing the right way. Here is hoping that the positive energy that came out of this victory propels the team to a good performance against the Washington Capitals on Tuesday night.