Somes quotes, notes and thoughts following a 5-1 loss to the Ottawa Senators. 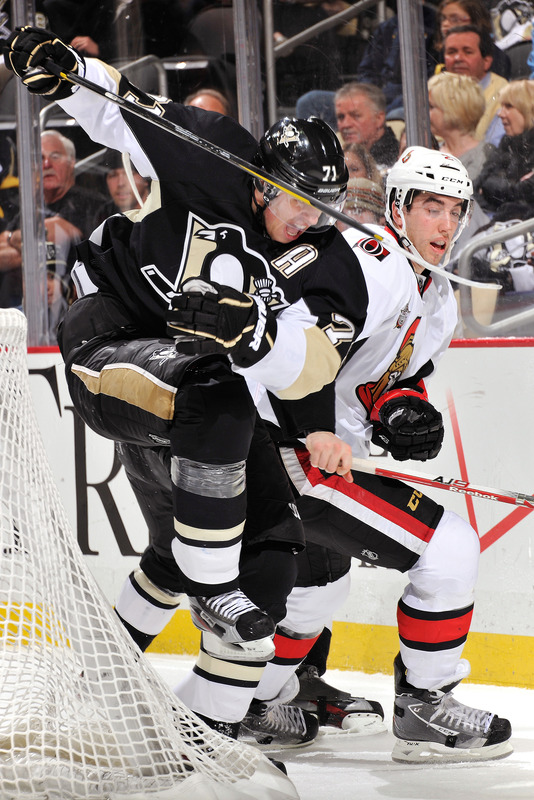 Well, there was a game played at the Consol Energy Center tonight, but I am not going to take a ton of time to talk about it.

It was ugly from start to finish. The Penguins dropped their fifth game in a row and there were moments during the evening when I wouldn’t accuse many on the ice about caring all that much about the outcome. Sure that is a bit harsh, but the lethargy is pretty obvious, especially on plays such as the Senators second goal.

The Penguins allowed Nick Foligno, who is having a fairly nice year, to walk end-to-end without pressure. He finally encountered four Penguins as he hit their blue line, but was still able to go straight to the net, flick a pass across to a streaking Bobby Butler who finished the play.

That was probably the moment that we knew this night was going to be just like the ones that came before it during this losing streak. It also prompted head coach Dan Bylsma to take his timeout, but it had little effect.

For as frustrating as this has been, I can’t say that I blame the boys all that much for it. It is awfully tough to get up for a game when you know that you are dealing with so many injuries. It had to be doubly so when all of the positive energy that came out of James Neal’s “not so broken” foot was immediately wiped away by another Penguin hitting the shelf minutes into tonight’s game.

Simon Despres left after playing only 3:00 minutes with what was called an upper body injury early in the first period and did not return. There was no update given on his status following the game and it looks as if he is destined to join many others on the shelf.

Eric Tangradi made yet another appearance in a NHL uniform and didn’t do much to change my thinking from this past weekend. He finished the evening with 3 shots on goal, 3 hits and a minus-2. We shall see what tomorrow holds for the youngster.

Some of the most interesting moments of the evening came in the form of post game quotes. Some during the player availability and some during the coach’s presser – here is some of that flavor for you. 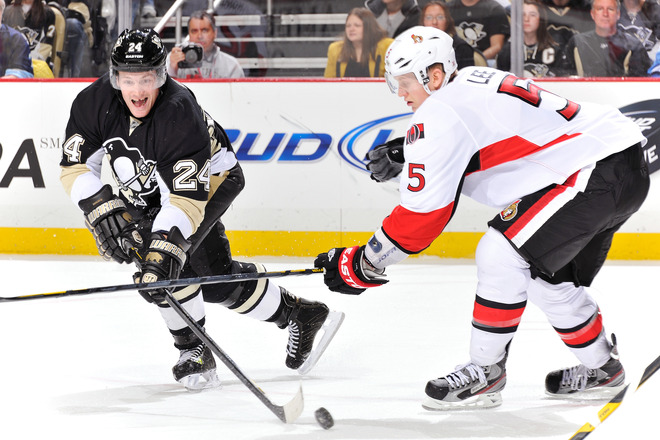 Matt Cooke didn’t seem pleased following the loss. He sat in his stall removing tape from his shin guard, with his lip bleeding from a late scrum with the Senators. He wasn’t shy about what this group needed to do. He also seemed to be making a point to us all that he didn’t want to be “misquoted.”

“We gotta be better; we know we do…no waiting around,” said Cooke. “The guys in this room have to be better. Everybody included. So there’s no misquotes I’m not calling anybody out, we each know individually and as a whole that we have more. We proved it last year and we need to prove it to ourselves.”

James Neal was a bit somber, but the good news is that he reported no issues with his foot. He specified that his foot is not impacting him on several occasions during his scrum. He also ran through some of the things that the group has been doing during the losing and what they need to do to pull out of it.

“We get to our game, but we get away from it so fast,” Neal said. “It’s staying with it, it’s doing the right things for the whole game and not doing it for five minutes and then going on your own page.

“You gotta stick with the systems and do the right things for sixty minutes.”

Personally that echoes what most of us have been saying about this team. They need to put together a 60 minute effort, which they haven’t done for quite some time. Heck, a case could be made that they weren’t playing 60 minutes even when things were going a bit better back in October and November.

Neal made a point of saying that this group couldn’t start feeling bad for itself after every bump in the road.

“If you bury heads after they score or something goes wrong and we keep putting our heads down we’re not going to dig ourselves out of where we are,” Neal said. “We’ll figure it out as a team, there’s a lot of character guys in here.”

That is the scary thing though… there are character guys, but the numbers have depleted either via injury or via free agent. This is the type of situation I feared when the team lost the likes of Max Talbot and Mike Rupp last summer. Those were the types of guys who joined with the Brooks Orpiks and Matt Cookes to hold it all together during the injuries of last season.

Overall, the boys know that they have got to pick it up and they intend to do so tomorrow evening in Washington, if not, they could find themselves on the outside looking in for the Eastern Conference playoff picture before the clock strikes midnight tomorrow evening.

With his goal tonight, Evgeni Malkin now has points in 11 of 13 games. Geno finished the evening 11-9 in the face-off circles, but was dominant during the first two periods going 10-3.He has won 62.5% of his draws over his last three games.

Speaking of Geno, it wouldn’t shock me to hear him listed as day-to-day tomorrow in Washington, as he took an awful shot from Sergei Gonchar that knocked him into the goal post and crossbar as he was scoring his goal. He laid on the group for a while and writhed, sending a chill through the CEC. He looked uncomfortable for some time afterward.

Colin Greening picked up 3-assists, while Nick Foligno notched 2. Milan Michalek scored 2-goals and was a plus-2.