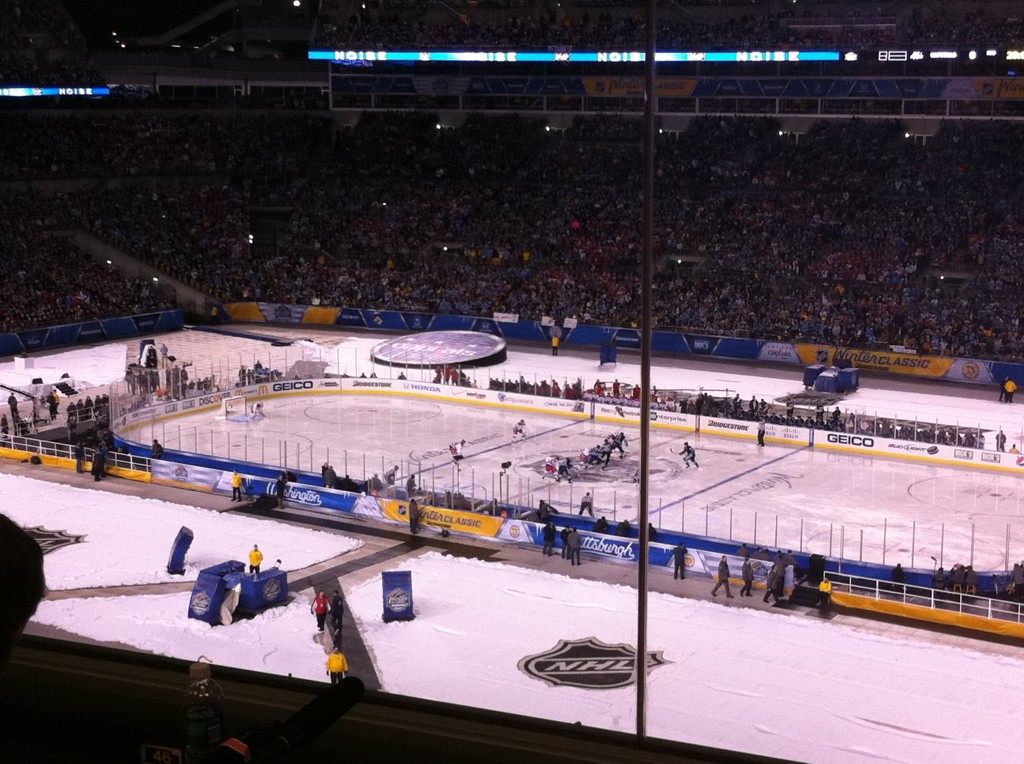 We spent close to a week getting ready for the event, as the rink construction began last weekend. Then there were a ton of events for media, players and fans as the league, the City of Pittsburgh and the teams did everything that was humanly possible to promote what is quickly becoming the NHL’s marquee event. And having witnessed it in person for the first time this evening I can vouch for the fact that it certainly is.

The Winter Classic is akin to the Super Bowl for the NHL… and that isn’t an understatement.

Yes, there is a winner and loser, but for the most part all of the players and coaches are just thrilled to participate. It is an event that takes them back to their youth and the days gone by of skating on the frozen ponds and lakes of their childhood. All of those feelings were summed up by Penguins head coach Dan Bylsma in his post game comments…

“It was a magnificient couple of days,” said Bylsma. “The experience for me and the guys coming out on the field with the fans and the game… I have talked to a handful of them now and you can’t compare it to any other experence.

“I walked out and the fans were going crazy and I turned to Tony and said, ‘cross that off of my bucket list because that was a very neat experience…”

Ultimately, that is what it is for all of these guys — a pretty neat experience. Bylsma went on to deliver another great quote as he stated that the only bad part of the experience is the fact that someone has got to lose the game and that is what his Penguins did tonight.

Though they took a 1-0 lead on an Evgeni Malkin goal early in the second period, they were outworked and out-hustled throughout the evening. The Capitals looked like the hungrier team and they were willing to do what it took to get the loose pucks in the corners and below the circles. Bruce Boudreau made a point of saying that was what their plan was coming in.

“We thought it was going to be a grind-it-out game, because after we were on the ice yesterday, it didn’t look like the ice conditions would be great,” said Boudreau. “So we knew the fancy tic-tac-toe stuff wasn’t going to work.

“So we knew that we had to dump it in, and we had to win the game below the circles and I thought we did a good job of that.”

That was never more evident than on the first goal scored by his team, as Mike Knuble crashed the net and scored a dirty goal off of a bouncing puck in around Marc Andre Fleury’s goal crease.

To that point in the game the goalies had been the big story, as they were standing on their heads. Both Semyon Varlamov and Fleury looked to be at the top of their respective games through one, but that didn’t continue for Fleury once he allowed the Knuble goal. He started to take unnecessary chances in playing the puck and one egregious mishap resulted in a goal by Eric Fehr.

He misplayed the puck and it was immediately intercepted by Marcus Johansson, who slid it to Fehr for the easy tap in.

Fleury made almost the identical play later in the game, as he dumped the puck up the boards only to see it picked off again. Alex Ovechkin interfered with him a bit as he tried to get back into position and the officials waived the eventual goal that Ovechkin scored on the play.

As I mentioned, the Penguins were disappointed by the loss, but realized that it was just another two points in the grand scheme of things. That wasn’t quite the case on the Capitals side of the coin, as they clearly saw this as a chance to beat the Penguins on a larger stage — something that they haven’t done with regularity over the years.

“This is like as close to the Stanley Cup as we’ve gotten,” said Boudreau when trying to describe the magnitude of the game. “And we’re not denying that it was more than just two points. It was a fabulous game and we came in wanting to win this thing.”

That attitude was very obvious on the ice.

Overall, it will still be an event that no one will ever forget as two of the biggest players in the game locked horns in an epic battle. Though the feel good vibe on Washington’s side will be short lived as these two teams will have two more clashes before the regular season is all said and done. You also can’t help but get the feeling that these two are going to meet again before the Stanley Cup is presented in June.

Jordan Staal was back in action and logged: 14:38 of ice time, 2 shots on goal and won 61% of his face-offs. His coach was particularly thrilled to have him back in the line-up.

“Great trade by Ray Shero in getting this guy. we didn’t quite – I didn’t know what to expect from Jordan tonight and what level he’d be at, but his first period was phenomenal, given the circumstances and the fact that he hasn’t played. I think he had two or three scoring chances and was outstanding on the penalty kill and so I thought he had an exceptional game.”

The Penguins, Capitals and their coaches seemed a bit sad that the HBO crew would be leaving them after almost a month of filming them in action…

“We’ve joked with the HBO guys that we’ll have to invite them back,” said Dan Bylsma. “We are going to miss them. I thought the show and it leading to the build up to this game was a unique look, a great experience.

“Our guys are shaking hands and saying good-bye to the HBO crew because we feel like we’re sending a player down.”

Boudreau will also miss them… a bit…

“We kind of like them now. I mean we didn’t like them much at the beginning of the month, but I think everything’s worked out.”

Speaking of Boudreau… he went out of his way to defend his captain tonight….

“He’s a team player. A lot of people are making a lot of big things out of the goals. He’s never once come to me and worried about his goal production. He says win — if you’ve watched the HBO stuff, every time we score he’s the first guy on the ice cheering and he’s happy for the team.

And today was the culmination of a lot of scrutiny for a month it didn’t matter if he scored. He was part of a winning team.

Like there’s a couple times he didn’t get it deep and he’s the first one coming to the bench going: I know, I know, I’m sorry. And he wants to do better. And you watch later on in the game he was doing whatever it took to win as a team.

I mean, long ago — last summer — he said he didn’t care about numbers, what he cares about is winning. I truly believe that and he’ll be just as happy if he gets 45 goals or 40 goals and he wins something in April, May and June as if he got 70 goals and had any individual awards.

And that’s what captains are all about. And he doesn’t get enough credit for it, but he deserves it.”

Here are some audio clips for you…