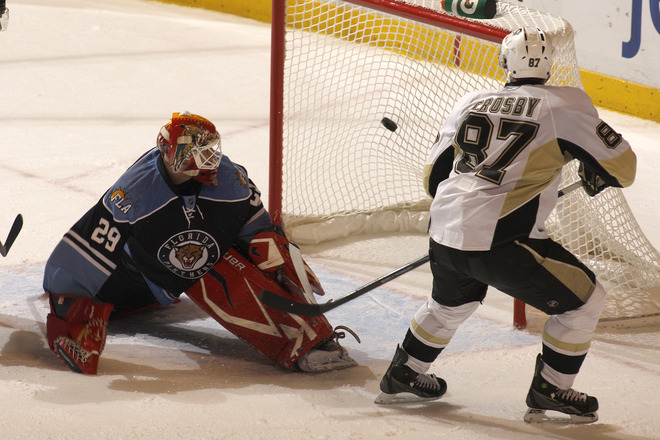 We are about an hour away from tonight’s Eastern Conference clash between the Penguins and Panthers. The Panthers are riding a two-game winning streak and are coming off of a very impressive 5-0 victory over the Philadelphia Flyers on Monday night. They are hoping to keep that rolling, as the Penguins are hoping to try and extend their own winning ways after thrashing the Phoenix Coyotes 6-1 in their last game.

Brent Johnson will get the call this evening and will be hoping to redeem himself after he and the Penguins watched a 1-0 lead turn into a pretty bad loss last week against the New York Rangers. Tomas Vokoun is expected to get the call for the Florida Panthers.

The Penguins lines will look an awful lot like they did on Monday evening, the only questions come up when you consider Ben Lovejoy and Eric Godard. My guess is that neither will play tonight, though Dan Bylsma has said that his line-up will be a game time decision.

Keep an eye on Michal Frolik, who has been red hot for the Panthers. He is really showing why he was a first round pick for the team back in 2006.

Not much else to report in regard to tonight’s game, but there are some additional notes that you should be aware of…

First of all, the Penguins and FSN have announced that there will be a marathon of classic Penguins games shown on Christmas Day…. here is the release from the team:

FSN Pittsburgh will celebrate the holidays with a Penguins Classic Marathon of games on December 25, 2010 from 1:00pm to midnight.  FSN has teamed up with the NHL Network to bring viewers a day packed with some of the greatest games in Penguins history.

Viewers will relive Mario Lemieux’s return and a Stanley Cup win.  The marathon of games begins on FSN at 1:00pm with the Mario Lemieux Comeback Game vs. Toronto Maple Leafs, from December 27, 2000.

Another notes that I neglected to comment on yesterday is that the Penguins website has been rated number one out of the US based NHL teams. I was excited for a couple of folks that do tireless work to keep the team’s official site up to date, interesting, and progressive! Congrats to the team’s entire writing staff, but specifically Sam Kasan and Jason Seidling! Though Jason has since moved into the media relations department, he and Sam produced a ton of content over the period that is laid out in the release…

The Pittsburgh Penguins’ website, www.pittsburghpenguins.com, ranks No. 1 among the 24 U.S.-based NHL teams in website traffic figures compiled from July through November.

The Pens’ website ranked third overall in the NHL and was the only U.S. team site in the top four.

During the five-month period, which included two summer months in the off-season, www.pittsburghpenguins.com averaged 816,309 unique visitors per month.

During November, the Pens’ site had 950,327 unique visitors and more than 6 million page views.

That wraps it up for now… stay tuned for more as we get to game time. As usual, I am live at the CONSOL Energy Center and will be bringing you all of the action…