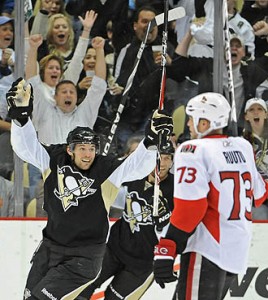 With Game 4 just hours away, Dan Bylsma has not made any announcement as to who would be filling in for the suspended Chris Kunitz.

Are you surprised? I certainly am not… this is the stinking NHL playoffs, where the maneuvering off of the ice is almost as intense as it on it. I wouldn’t be surprised to hear that Mike Comrie and Eric Tangradi skate in the 3-2 drill this evening prior to the game. The misdirection will go on until the game actually begins.

My guess is that Eric Tangradi will be the guy getting the call. He was inserted into the line-up for the final regular season game and did a nice job for the team. He adds size and skill down low and could add a dimension to the power play. Having his giant frame camped out in front of the goal could only help the cause for a unit that has gone 0FER the series. As Chris Mack pointed out during my appearance on TribLive Radio this morning, he could be inserted on the top line and give Mark Letestu and Alexei Kovalev a net front presence that hasn’t come from James Neal. The move would shift Neal onto a line with Jordan Staal and Tyler Kennedy… the different look could be good for all involved.

Though signs are pointing to Tangradi, do not discount the possibility of Mike Comrie being thrown out there. He has playoff experience, can play in multiple roles and would give Dan Bylsma some flexibility shift to shift. If he is the guy, I hope that he isn’t automatically tossed in there on the third or fourth line. Those units have been light’s out and should be left intact. Give Comrie a shot with Kovy and Neal, or Staal and Kennedy. He is known more for his skill than his checking ability…putting him in a situation to make a play could be great for him and those around him. Bylsma hasn’t played him with skill guys since training camp. 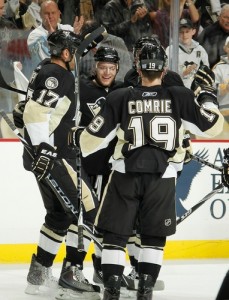 Keep your eye on the aforementioned Penguins power play unit… will tonight be the night that they finally break through? Who knows… though the power play was a focus during the team’s skate on Tuesday. My hope is that the Birds just start crashing the net, Dwayne Roloson has been giving up rebers in bunches.

Though this series has been too close to call, I really have a feeling that the Birds will return home with a chance to clinch on Saturday afternoon. Could the Lightning lay a touchdown on the Pens tonight? Sure, anything is possible, but I just have a vibe going.

I will stick with my prediction of Penguins in six games; however I will preface it by saying that in my round-table response for Faceoff-Factor I specifically mentioned a five game series as a possibility.

Here is the response for your review… I was asked for a prediction:

3. Though the Penguins are playing without some of their best and brightest, they have found a way to notch the second best season in franchise history. Their attention to detail, work ethic and never say die attitude will see them take this series in six games… (Truly, I could see it being a five game affair, as the Lightning may fall into the trap of being a bit wide eyed early on in the series — a la the Penguins circa 2006-07 against the Senators.)

Read the full roundtable featuring myself, Hooks Orpik, Sean Leahy and Derek from the Pensblog, Tony C from the Confluence and Chris Gates

There really isn’t much more to say about tonight’s game… we’ll be looking for more five-on-five scoring from YOUR Pittsburgh Penguins, a great outing from Marc Andre Fleury, the mystery Kunitz replacement and a potential clincher in Pittsburgh on Saturday.

Stay tuned for much more after, including “Five Things…”