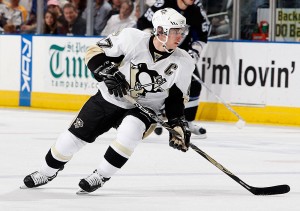 Well, I am not going to say that Mark Madden had anything to do with this news, but it is sort of peculiar that less than 24-hours after he asked for some answers on the Penguins’ captain we were given some news. Shake the tree and suddenly some fruit falls to the ground?

Crosby has joined the team for their current road trip which kicks off this evening in Washington and is scheduled to start skating at some point during the Florida portion of the trip that will see the team face-off against the Panthers and Lightning.

“Tonight, Sidney Crosby will be joining us on the road trip,” Bylsma told the gathered media during availability this afternoon. “He will be skating during this trip. He also will at some point in time address the media as well. No set plan, but this will happen in the next few days.”

As you saw in the coaches comments, Crosby will also address the media at some point in the near future, something that many in the city have been clamoring for.

Crosby has been doing only off-ice workouts to this point, but things must be moving in the right direction if they are going to get him back on skates.

“(Crosby) has been working out with light exercises in the weight room and on the bike,” Bylsma said. “We’ll be glad to see him on the ice.”

Let’s also be clear, Crosby hasn’t rejoined practices, as some have speculated on various social media networks. He is merely taking the next steps and skating, as Kris Letang has been doing for the past three or four days.

There is still no timetable for Crosby’s return, but this is definitely a big step in his rehabilitation. It will be interesting to see how he contends with the on-ice exertion.

Simon Despres who left last night’s game with a lower body injury was diagnosed with a “grade 1 MCL” injury and will miss 2-4 weeks. Dustin Jeffrey, who was out with a knee injury of his own will return to the Penguins’ line-up tonight in Washington and will skate with Pascal Dupuis and Tyler Kennedy.

Hopefully the news about their captain will spark a victory for the birds… time will tell.