Hm, I think that I might have actually used that headline for a blog that I wrote about Penguins training camp a few years back. The Penguins aren’t quite in training camp yet, but I certainly am!

Hm, I think that I might have actually used that headline for a blog that I wrote about Penguins training camp a few years back. The Penguins aren’t quite in training camp yet, but I certainly am! We always schedule a yearly camping excursion for after the hockey season and this is the week. I am typing this from beautiful Tionesta, Pa…it is our first time at this campground and we are digging it. The only drawbacks are that it isn’t on the water, so fishing is not an easy thing. The beach that was advertised in the brochure is closed and the nearest place to get groceries is in a little spot called Oil City, which is about 25 miles away… No worries though, enjoying it just the same.

I will be following along with the NHL Awards this evening via the trusty laptop… doing the same with the draft on Friday night. I will tell you that there is nothing like sitting around the campfire, having an adult beverage or two and listening to the 2010 crop of prospects find out who their future employers are going to be. But enough about my get away… let’s get down to business…

First of all, the Matt Cooke signing, as you all know, was made official yesterday afternoon. He took a healthy discount as well, ($1.8 mil per) which should really help Ray Shero’s cause moving forward with the remaining free agents and anyone he is looking to bring in from the outside. Cooke was very complimentary of the Penguins and their situation in an interview with 105.9 the X following his signing.

“There’s a benefit to playing in Pittsburgh,” Cooke told Tim Benz of the X. “It’s a winning scenario. Their core guys are locked up long term. That’s a set-up for long term success.” 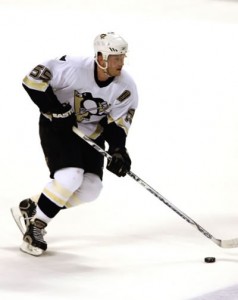 That set-up is precisely why I have been preaching about Sergei Gonchar staying put. Gonchar has been here for five seasons and had some great successes along the way, including two trips to the Stanley Cup Final and one Cup victory. You may remember that he struggled a bit upon arriving in Pittsburgh back in 2005. He also struggled a bit upon arriving in Boston right before the lockout when they B’s traded for him in a deadline deal. He is a much more effective player in an environment in which he is comfortable.

To say the least, Gonchar is comfortable in Pittsburgh. He is a team leader and is a calming influence in the locker room and on the ice. He wants to stay in Pittsburgh…the Penguins want to keep him. I really believe that they will find a way to get this deal done and he will finish his career in Pittsburgh.

I am sort of surprised at how many folks are ready to cut him loose. Sure he didn’t have the greatest playoffs ever, especially the Montreal series, but there aren’t many Penguins that had a great series against Montreal. Gonchar is still an elite power play quarterback, is decent in his own zone and has been been the leader of this blueline for five seasons. Let’s not loose sight of the fact that he still managed to finish in the top 10 defensive scorers, even while missing 20 plus games last season.

At the end of the day, I really see the sides getting this done before the weekend. They will find common ground…

If something were to go awry with this negotiation, the Penguins could consider moving Sarge’s rights, but when it happens you will hear it from a legit source… don’t play into the crap that has been floating around. The same outlet has already let the hockey masses down the incorrect path on two occasions in two days… that is more than enough to tell you that it is all hogwash.