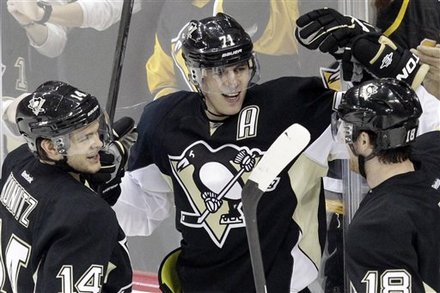 Just as the Penguins dropped six games before our very eyes over the past couple of weeks, they have now won three in a row. I guess there is nothing like a healthy dose of the Southeast Division to help right some of the wrongs hat have been going on.

The Penguins finished off their three game set against the Southeast tonight with an impressive come-from-behind 2-1 victory over the Carolina Hurricanes. They got another amazing performance from Evgeni Malkin, who looks to be playing the finest hockey of his career, 6 more shots out of James Neal and an impressive performance out of Marc Andre Fleury.

If nothing else, the controversies of the past week energized this group and put a bit of a chip on their shoulders. If they were dealing with any internal strife they have turned that into motivation and a desire to prove the world wrong, the result has been victory.

As I mentioned, Malkin turned in another brilliant performance and his line and he dominated throughout the night. His goal, the one that tied this affair at 1-1, was especially impressive. He got the puck near the right dot and fired a shot that seemed to deflect up and off of the backboards. As the puck caromed to the front of the net, Eric Staal tried to get a handle on it, but Malkin chipped it away from him and kicked it forward to his stick as he moved to the net. He immediately sent a laser over Cam Ward and into the top of the net. It wasn’t quite on par with the “Geno” that he scored against Ward back during the 2009 playoffs, but it was close. Malkin finished the night with 1-goal, 6 shots on goal and a plus-1. His teammates were effusive in their praise post game.

“Yeah, probably this and then that Carolina series the year we won it was probably obviously highlighted a little bit more because it was playoffs,” said Brooks Orpik when asked if this was the best he has ever seen Malkin play. “This is probably — everyone you talk to says ACL, it takes 12 months to recover so this isn’t 100-percent for him — it’s pretty scary because like you said, this is as good as he’s played in a long time.”

Matt Cooke didn’t go that far over the top, but he has still been impressed by Malkin.

“I don’t know, I saw him play pretty well in 2009,” said Cooke. “I don’t think that I would say it’s the best, but he’s at the front of the rope tugging hard right now and we need him to do that.”

The game also featured the first shootout for the Penguins since 11/05. The first that they have had to tackle without their go to guy Kris Letang… luckily they were able to utilize their new closer – James Neal. 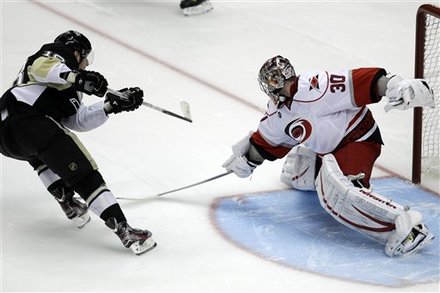 Neal joked about the fact that last season it seemed that there was a shootout every night. He then went on to talk about what a huge win it was for this group, especially at home.

“It’s huge, especially at home,” said Neal. “You don’t want to come home and be too comfortable. We need to make this building tough to play in. So, coming off the road, we did a job on the road and it was nice to come home and get the win.”

Neal then talked a little about his shootout attempt, saying that he didn’t really plan anything out and for good reason.

“It’s tough when Geno is shooting ahead of you and making those kinds of moves… it’s tough to get a read on the goalie.”

One of the biggest moments of the night and one of its scariest was the Brooks Orpik hit on Jeff Skinner. Though the hit was clean, Skinner, who has just returned from a concussion, was left lying in a heap on the ice. He seemed to have trouble getting up, and then appeared to be angry in smashing his stick as he left down the runway. Orpik was assessed an interference penalty, which didn’t quite seem accurate in and of itself, but Skinner did return to the game.

James Neal, Evgeni Malkin, Matt Cooke and Brooks Orpik himself all weighed in on the hit. All felt it was clean and that Skinner actually was controlling the puck when he came in contact with Orpik.

“It’s a good hit, [44] kept his elbows down,” said Neal. “Just went through him. Skinners got his hand on the puck or he’s reaching for it. Obviously it will be looked at, but from the jumbotron looked good.”

Cooke thought the penalty call was a bit late…

“It felt like it was a little late, but referees have a split second to make a call,” said Cooke. “Skinner did touch the puck. His [the referee] assessment of the play was that he didn’t, so he gave Brooksie interference. Those penalties are penalties that our team is going to kill 100 times over because it was a clean play.”

Geno echoed the sentiments of his teammates.

“Skinner touch puck before hit… maybe it looked a little dangerous, but when you see the play, it’s a clean hit.” 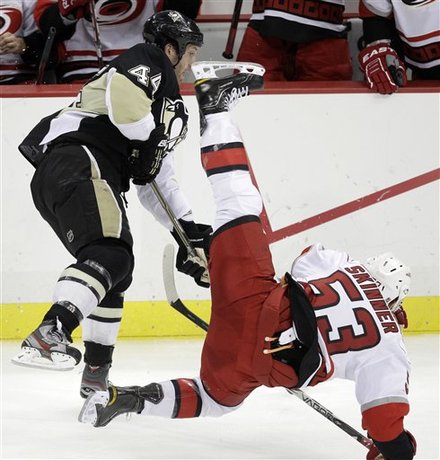 Orpik acquitted the referees for the interference call and didn’t seem to be too upset about how the situation transpired.

“You just gotta remind yourself that they’re doing the best that they can,” said Orpik. “It happens really fast, even the replays, some of those you slow down and it’s still tough to tell. Tough to fault those guys when it happens real time. They are just trying to do the right thing.”

At the end of the day, Skinner is seemingly ok; the Penguins won again and are primed for a couple of tough match-ups against the New York Rangers, Montreal Canadiens and Washington Capitals this weekend. It will do this group good to not allow their recent winning to allow them to forget the recent past.

“Nope,” said Cooke when asked if these wins have helped them forget the six game losing streak. “We gotta keep it right close to us, we gotta keep going the same way and make sure that we keep playing the same way…the way we know that we can and the way that’s made us successful over these last three games and to do that, we gotta make sure that we have fond memories of where we were before that.”

Pascal Dupuis also had 7 shots on the night, Kunitz had 4. The Penguins finished the evening with 41 shots on goal.

Deryk Engelland and Tim Gleason produced one of the most spirited fights that I have seen in quite some time. I could describe it no other way than to call it “exchanging piston punches.”