As you all know, Jon Jordan from the Beasts of the SouthEast blog at Kuklas Korner and I have been teaming up for coverage throughout the Penguins/Lightning series. That coverage continues today with Jon’s answers to my Game 3 aftermath questions, however we also have a special announcement.

We will be going live with a podcast tonight. It has been a long while since the days of the Hockey Buzzcasts, but JJ and I will be taking Talkshoe by storm this evening at 7:45 with what could be the first and last episode of “Birds and Bolts: Playoff Showdown.” Hopefully you can all be there to experience the magic!

You can also hear me tomorrow morning as I sit in on the TribLive morning show with Chris Mack starting at 10:30 am. I am not certain, but I believe I will be sitting in the Rick Tocchet chair, as he is in Buffalo with the Flyers doing some broadcast work. I am pretty pumped… hopefully you all can check it out… here is the link: TribLive Radio

Now without further Adieu… here are JJ’s answers to my inquiries! He talks Stamkos, Lightning Physicality and Special Teams. 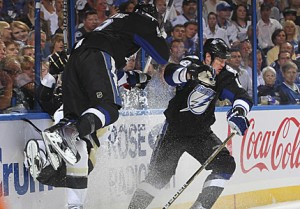 BM: I realize that you asked me a question about the fact that the Lightning might have been a little too amped up to start the game, but I am a bit curious, have they been instructed to out-physical the Pens? The birds have made it an edict to lay the body and to be physical as often as possible, it is all part of the Disco Dan system, but the Lightning have done a great job of staying neck and neck in the hit department. Heck, in all actuality, they have outhit the Penguins. What is your take?

JJ: I think a key for the Bolts is to stay even-keeled in terms of playing an aggressive, physical game and – CATCH PHRASE ALERT – staying within their system. They can hit like crazy, as can the Pens, as we’ve seen but, on at least three occasions last night, that proved costly:

One, Ryan Malone and James Neal collide hard in the corner early on in the game and Malone leaves the worse for wear. Granted, that could happen to any player on any play but it isn’t as though these guys can just go all out with reckless abandon. As you well know, Bugsy’s as huge a piece for the Lightning as he once was for the Penguins, if not more. (We will all have to keep a close eye on how he fares the rest of the way.)

Two, Steve Downie’s railroading of Ben Lovejoy not only led to a Pens goal (well, sort of… Coach Boucher seemed to think guys were standing around admiring the aftermath as Max Talbot and Co. headed up ice, eventually opening the scoring) but we know now that it costs the Lightning Downie’s services in game four. (That the suspension to Chris Kunitz evens the score, so to speak, is immaterial, to make this point.)

Finally, Victor Hedman’s attempt to wipe out Mike Rupp at the Lightning blue line failed miserably when Rupp side-stepped the hit, entered the zone freely and was able to connect on a pass to Arron Asham for the goal that made it 2-0. Heddy knows he overplayed that there, saying after the game that he should have, “Take the rush instead of trying to make the big hit.” Of course, if he connects there, that’s a potential momentum-swinger too. Alas, he didn’t. And we saw what happened.

So, are they being guided to “out-physical the Pens”? Given the structure that I know Boucher wants them to stay within and his general disappointment in some of the mistakes that were made (specifically, last night), in a word, no.

BM: Now that you have had a chance to see and or chat with Steven Stamkos during the series, how is he holding up? Did he seem at all rattled to you? He is looking a bit more like himself as the series rolls on, at least in my opinion. He is seemingly skating with confidence and creating opportunities… do you expect to see him break out at some point during this series or will the Lightning’s success continue to come at the hands of Lecavalier and St. Louis? 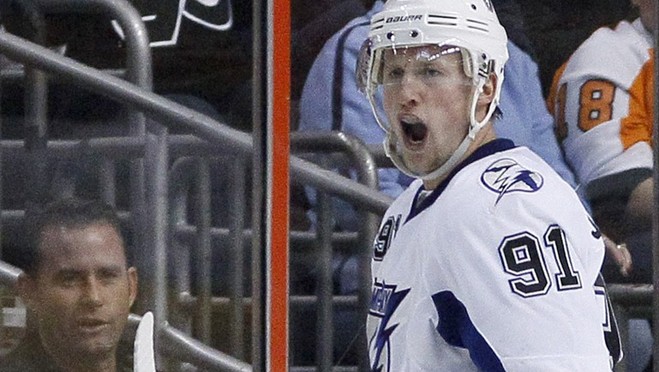 JJ: I still expect Stamkos to break out at some point. I have no choice but to expect that, having seen him explode onto the scene the last two-and-a-half years as he has. And I agree with you that he has gotten better with each game thus far, although I believe the shifting around he did in game two probably didn’t do much for his confidence, in the end, though that didn’t hurt the team, given the 5-1 end result. Still, he’s a confident kid and I’m not seeing much change about that.

Now then, I haven’t spoken directly with Stamkos since this series began. Obviously, they were up there in your neck of the woods for games one and two and last night, he was out of the room in relatively short order (before I could get to him anyway). I know that game one served as a realization to him about the “compete level” needed to succeed in the playoffs (and I believe Brooks Orpik helped him with that lesson right away, as I’m sure you remember!)

He had several opportunities last night, including that point blank redirect chance on which he was absolutely robbed by Marc-Andre Fleury. He also managed his first career playoff point, something that players often play down when slumping but, deep down, has to be a bit of a jolt.

I wouldn’t call him rattled, per se, but how can a dynamic scorer like Steven Stamkos NOT be significantly frustrated by the lack of scoring he’s mustered in the last 16 games overall, between the end of the regular season and these first three playoff games (two goals, in total… One of the non-empty net variety!)

I’m now of the opinion that #91 needs a goal off of his face, his ass or something like that just to kind of get the mojo going again. Once he gets one – a tough task, given the circumstances, mind you – I’m sure he’ll get it going again. All in all, the lessons he’s learning right now will only serve to make him an even better player in the long run. Scary, when you remember that he is but 21 years old.

BM: We both pointed out that special teams were going to be a huge part of the series and that the team that won that battle would likely be the winner. To this point special teams have been very important, but they haven’t made quite the impact that I thought that they would. The Penguins have been downright awful on the power play going OFER 15, while their PK has yielded 4-goals on 11 Lightning advantages, yet they lead the series 2-1. Seems strange, but I guess they are finding a way… what is your take?

JJ: I’ll take the opposite angle, in that, if the Pens had any kind of power play going, or if their PK was up to snuff, as it was for the majority of the regular season, they could very well be up 3-0 right now. That might be hard to comprehend, given the well-rounded performance the Lightning put forth in game two but, as we all know, even a 5-1 game isn’t as one-sided as it seems, if you can get yourself to go back in time and consider one or two things that could very well have gone the other way.

In this case, a successful PK here or there and/or a power play tally for Pittsburgh and maybe a 3-1 game is 2-2. Who knows?

A few things stick out here, as you bring up special teams again. One, to this point, the Lightning have managed to avoid the bugaboo that, for their sake, I feared, which is the dreaded shorthanded goal. I still see the potential for a real series-shifter there, if the Pens can create a turnover with the Bolts on the man advantage. I can’t seem to shake that, for some reason, probably because the Bolts were victimized by just that more than any other team in the league during the regular season.

Two, even without Sidney Crosby and Evgeni Malkin, this Pittsburgh power play is not going to go 0-for-the series. You’d think they’ll get one or two with the extra man eventually. For Tampa Bay’s sake, they’ll have to hope those markers come during garbage time, if there is such a thing in this tight matchup, and not at a key point. But you have to expect it to come. Even the best penalty kill isn’t perfect forever, nor the worst power play perpetually inept.

Last of all, we’re only three games in. When we’re talking about keys to the series, while there might be a leading indicator or two in the early-going, the truly impactful moments might not come until somebody’s back is close(r) to the wall. For example, if the Pens go 0-for-30 on the power play and win the series with one PPG in the third overtime of game seven, you wouldn’t be complaining, would you?

Here is a link to the questions I answered for JJ following Game 3: