JJ and Metz go head to head again following the Lightning’s blow out win in Pittsburgh on Saturday.

As has been the case throughout this series, JJ and I are back with another edition of “Rebel v Rebel.” I hit him with a series of Game 5 questions and he eloquently answered like the Tampa Bay Lightning expect we know him to be. We aren’t sure how much longer this series will roll on, but I hope that you guys have enjoyed what we have done to this point to get you as much info from both sides as possible! In this series of Qs, JJ talks winning by a touchdown, getting some of the sleeping giants going, Dwayne Roloson and the cerebral approach of Guy Boucher.

BM – We have seen almost everything in this series… I guess it is high time that we got a blowout! The good part of the game is that the Lightning got contributions from a number of the players that we have been criticizing for not showing up. They got points from 13 different players, goals from five guys not named St. Louis and saw the first big contributions from Steven Stamkos and Pavel Kubina. Was the a good thing in your estimation or are you concerned that it was a bit too much of a good thing? It seems that sometimes you are looking at a situation where you only have so many in the hopper and the Penguins defense will certainly play better on Monday. 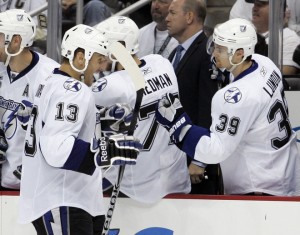 JJ – Honestly, my friend, at this point? I don’t even know how to answer this one. After an 8-2 decision, and what we’ve seen the rest of the series, what we see on Monday could literally be anything. Had I not seen the overeager, mistake-prone play the Bolts put forth in the first period of game three, and had I not seen the lax, sleepwalking Lightning of game four’s first period, I’d fully anticipate a jacked-up Bolts bunch ready to knot this thing up in game six.

All in all, I think that’s what they’ll aim to be, but this Lightning team has not yet shown an ability to master the emotional stability needed to perform at home in the playoffs.

BM – I know that I have asked about this before but I am going there again. Are you at all concerned about Dwayne Roloson? It looked to me as if he actually looked behind himself on a number of occasions today. It is worth noting that he did make most of the saves that he had to make, but he didn’t look very confident in doing so. He also was letting up rebounds like a champ again, if the Penguins ever start to get sticks on those, which they almost did during the first 15 minutes of this game, he could be in some trouble. Thoughts?

JJ – Look, the Lightning were up early in this one and big-time soon after that. If a goaltender ever needed that kind of cushion behind him, it’s Dwayne Roloson, after the three iffy goals he allowed in game four. That’s all well and good – and certainly a positive, from a bottom-line perspective, but is it an accurate read on how much you can trust your netminder? I can’t say that it is – not after the up and down ride we’ve been on with him so far.

Deep down, I still believe he has what it takes to backtop a true contender. For now, though, he’s that very guy, who just so happens to have an unfortunate tick for giving up a softy every now and again. Come crunch time – like, real, game seven-style crunch time – that just can’t happen at all…

BM – Interesting to hear Guy Boucher talk post game about the fact that his team probably got a bit too up following their Game 2 victory in Pittsburgh. He talked candidly about the fact that he does have a fairly young team and that they have had to learn quickly against an experienced Penguins team. He also said that he felt that they were not getting too up after this amazing performance today. (to use your line) What so you sir? Can the Lightning stay focused on what needs to be done and not allow themselves to feel too good about themselves following a fairly dominant performance this afternoon in the Burgh? As a second part of this question…are you sticking to the Pens in Six or does this game make you teeter a bit. 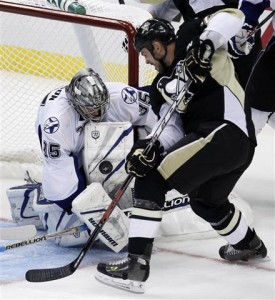 JJ – I’ll answer the second part first (and get the put-a-gun-to-my-head part out of the way ASAP): I have to stick with my original prediction, especially now that it’s a Pens win on Monday away from coming perfectly true…

As for the rest of your question, if there’s one thing I know about this Lightning team, it’s that they respond to Coach Boucher. If he’s put it in their heads that they came out too fired up after their game two win and that that is something they need to be cautious of in game six, they’ll believe it.

But he can preach that and teach it as much as he wants. It still will end up being up to the players to be the quick learns that they’ve no doubt been told they need to be, in terms of steadily toeing the line between emotion and overaggression.

It may be tough to NOT get too fired up about an 8-2 win but, if these players have that mental “it”, they’re going to have to realize that, whether it’s 1-0 or 49-2, it’s just one single win. A huge one, obviously, but one nonetheless.

The Bolts have two to go, remember, before they can truly call any of this “a win” anyway…