The Rebel v Rebel series rolls on as BOTSE’s Jon Jordan and I again come together to answer a series of questions about Pens/Lightning!

JJ and I had a bit of a communication break down over the two day series layoff, which resulted in no recap questions here at the site following Game 2… apparently he posted my answers to his questions on Saturday, but his were lost in space. I will post a link to my Game 2 answers at the end of this blog, but first I have answers to two very important questions that JJ sent me this afternoon.

As he and I go through this process, feel free to drop me a line if there are any specific Lightning related questions that you would like me to hit him with as part of Rebel v Rebel!

Enough rambling on my part… here are the questions I posed to Jon Jordan this afternoon and his always insightful answers for you review!

BM – Though Simon Gagne has been in and out of the line-up throughout the season, he has a lot of playoff experience and more importantly a lot of experience in playing the Penguins. He was another of the heroes of Game 2 and looked a like the guy that Yzerman hoped he had brought in with three helpers. To your knowledge has he given any specific input on tactics that could be helpful against the Penguins? Can you speak to the intangibles that a guy like Gagne brings to the team?

JJ – While I cannot speak to Gagne having any specific pointers on playing against the Penguins in the playoffs, I’m sure, like many of the other veterans, he’s interjected an opinion or two and some general advice stemming from his extensive postseason experience as a professional. More important than that, however, and more valuable to the team overall, is the penchant for clutch performance that Gagne brings, especially at this time of the year, when literally everything is on the line.

When Gagne was brought in from Philadelphia this past summer, for defenseman Matt Walker and a fourth-round pick, his ultimate value to the club was always going to be measured by playoff success. On one hand, a guy like Gagne was brought in to help get this team to the playoffs and, on the other, to put his 90+ games of postseason experience to good use and contribute regularly. If the Bolts make any sort of extended run, I have a sneaky suspicion that Gagne’s trio of helpers in game two was only the tip of the proverbial iceberg, in terms of offensive production.

It’s funny because many of us locally have already weighed Walker’s contributions to Philadelphia (a total of four games, thanks to injury and a demotion to the AHL) and the unknown commodity that is a fourth-round draft pick against Gagne’s modest production for Tampa (40 points in an injury-shortened season himself). I think the Lightning won out on the deal on that alone but, again, it’s now – in the playoffs – when Simon Gagne’s true value will become clear.

BM – Have the Lightning made it a point to crash the net on the Penguins? It seemed as if they were going out of the way to rattle the cage of Marc Andre Fleury and it resulted in one of his worst outings in quite a while. I realize that getting to the net is always important no matter who the teams involved are, however it seems that the area in front of Fleury is going to be a huge key the rest of the way…so much so that Dan Bylsma has contemplated inserting Deryk Engelland into the line-up to help clean up that area. 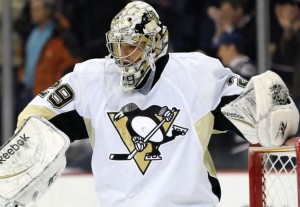 JJ – I think it was made very clear after game one that the Bolts needed to disrupt Fleury’s confidence and momentum stemming from that shutout performance. What’s the most basic way to do that against any goaltender? Crash the net, set screens and hammer away on rebound chances. The Lightning did a much better job of that in game two and I expect we’ll see a concerted effort to do more of the same moving forward. How the Pens combat that, you’re right, could be a major key to the rest of the series.

I would counter with this – and no disrespect to Deryk Engelland is intended in doing so – but, if the Penguins are making that kind of lineup adjustment, or even considering as much, as a response to the Lightning imposing their will in front of their net, who comes out of the lineup and are they a better club therein? It isn’t as though Engelland, or anyone, can automatically strengthen that perceived soft spot from the second game of the series.

Instead, the Pens are probably better served making sure everyone – d-men AND forwards – is on board when it comes to picking up a guy down low and doing anything they can to eliminate, or at least cut down, secondary scoring chances.

Last but not least, here is the link to my Game 2 “Aftermath” answers over at Jon’s blog…

Here are my answers to JJ’s Game 3 questions…