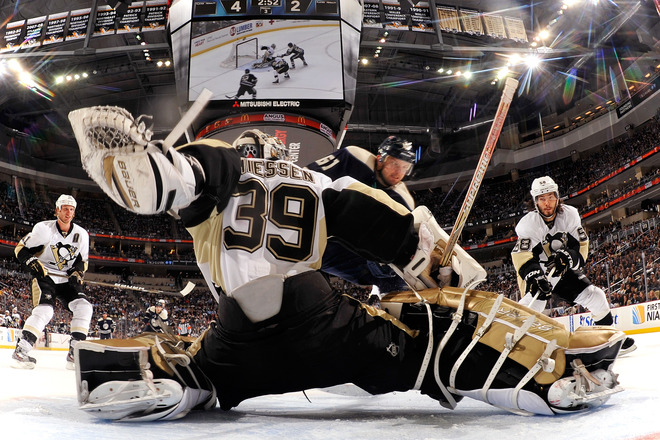 PITTSBURGH – Back-to-back weekend games haven’t been too kind to the Pittsburgh Penguins.

The most recent example came one week ago after the Penguins followed up a stellar effort against their rival Philadelphia Flyers with a laugher the next day at Buffalo.

But the Penguins, coming off an 8-1 rout a day earlier against Tampa Bay, made sure history wouldn’t repeat itself. Evgeni Malkin and Kris Letang each scored on the power play helping rookie goaltender Brad Thiessen pick up his first National Hockey League victory as the Penguins, despite two disallowed goals in the third period, were still able to defeat the lowly Columbus Blue Jackets, 4-2, Sunday at Consol Energy Center in Pittsburgh.

“We talked about refocusing and being consistent in how we play the game after the victory against Tampa Bay,” said Penguins’ head coach Dan Bylsma, who, on Sunday, became the fastest to reach 150 wins in NHL history, achieving the feat in his 251st game.

“It’s two big, consistent wins for us, and we need wins. We need to keep putting them together regardless of the opponent and I thought we had two good responses this weekend.”

The Penguins, who are seven points behind the New York Rangers for the top spot in the Eastern Conference, won for the ninth time in 10 home games, scoring 40 goals in that span. Pittsburgh has averaged nearly four goals per game during a 15-4-1 stretch, rebounding from a season-worst six-game skid where the Penguins totaled just six goals.

“To be honest, at this point of the year, we don’t really look at who we’re playing,” Letang said. “Every game is important. We’re not looking to just make the playoffs. We want to catch the Rangers and we have to win these games.”

The Penguins have done that largely without captain Sidney Crosby, going 30-19-4, while he continues to recover from recurring effects of a concussion suffered in December after a brief comeback.

Malkin, who tallied his ninth career hat trick against Tampa Bay, has stepped up in Crosby’s absence, scoring 18 goals and 34 points since Dec. 13. He leads the league with 77 points and has 14 goals and eight assists in his last 12 home games.

With a red-hot Malkin leading the way, and a possible Crosby return, the Penguins likely won’t shake things up too much as Monday’s trade deadline approaches. But that doesn’t mean a deal or two might be made to solidify the roster for the playoff run.

“It’s that time of you, obviously everybody looks at the TV,” said Penguins’ winger Pascal Dupuis. “Whatever happens, it’s a business. I don’t think one guy in this locker room wants to leave and I think we do have pretty good chemistry, but I guess we’ll see whatever management wants to do to improve this team.”

Dupuis scored 55 seconds after the Penguins’ first disallowed goal and Letang notched the game-winner 1:29 after his initial power-play goal was waived off four seconds into the man advantage.

“I think, at that point in the game, that third goal was really important for us,” Letang said. 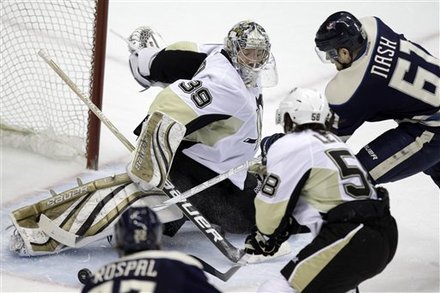 It was enough to give Thiessen his first career win as he stopped 22 shots and became the first in franchise history to win a game in his NHL debut since Patrick Lalime in 1996.

“It was a lot of fun just to be part of it and to be able to contribute to a win,” Thiessen said. “It was everything I expected and more.”

Thiessen, who got a shaving cream pie in the face after the game and an inadvertent bloody nose as a result, gave starter Marc-Andre Fleury a break and filled in as backup Brent Johnson battles injury.

Thiessen, whose 24 wins ranks fourth in the American Hockey League, didn’t see many shots early, but several of the five he stopped in the first period were sharp, including one on former Penguin Mark Letestu.

“I think as the game went on, you could see he was comfortable in the net,” Bylsma said. “He’s been around with a lot of these guys at different times throughout the last four years, and I think guys were very aware and doing everything they can to minimize the chances against.

“It was a great first win for Brad in his first NHL game.”

The Blue Jackets however, drew first blood midway through the second after Rick Nash scored a short-handed goal on a partial breakaway.

Nash, the franchise’s all-time leading scorer, might have notched his final goal in a Blue Jackets uniform as the 27-year-old sniper has been the subject of rampant trade rumors the past several weeks. Columbus defenseman Nikita Nikitin, following a Penguins turnover in the neutral zone, banked a pass off the boards to Nash, who beat
Thiessen on the blocker side to give the Blue Jackets a 1-0 lead.

It was an optimum start for the worst team in the league, which already began rebuilding by trading away two of its top offensive players – Antoine Vermette and Jeff Carter – last week. But the Penguins’ biggest star answered in a big way. Malkin tied it with a power play goal, scoring his 37th of the season, in the final minute of the second period after Plum native R.J. Umberger was sent off for slashing.

Malkin, corralled a pass from James Neal on the backhand before flipping to his forehand and whipping a wrist shot behind Blue Jackets goaltender Curtis Sanford.

A Kunitz goal was disallowed five minutes into the third, but Dupuis gave the Penguins a 2-1 lead 55 seconds later, circling from behind the net before turning and firing a wrist shot behind Sanford from the faceoff dot.

Letang initially scored four seconds after Derick Brassard was sent off for slashing, but the goal was disallowed because of incidental contact in front of the net with Sanford, who stopped 36 shots.

Letang made it a 3-1 game with a power play goal 1:29 later, blasting his ninth of the year behind Sanford.

Joe Vitale put the Penguins ahead 4-1 and Vinny Prospal answered with a wrist shot past Thiessen 10 seconds later, but it wasn’t enough to overcome three Pittsburgh goals during a 10-minute span in the third period.