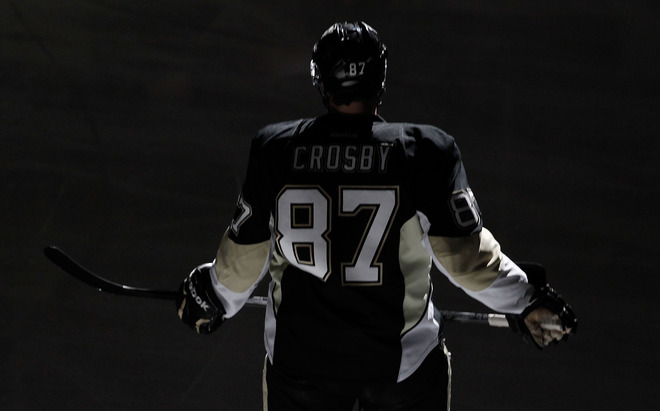 And the National Hockey League has just been put on notice. Pittsburgh Penguins’ superstar captain Sidney Crosby returned in dramatic fashion, playing for the first time after sitting out more than 10 months with concussion-like symptoms as he figured in on four of his team’s five goals, scoring twice, registering four points during a dominating 5-0 victory against the New York Islanders in front of a standing-room only sellout crowd at the Consol Energy Center in Pittsburgh.

“The goals and assists were great, but just being back out there, I can’t really even describe it,” Crosby said. “It was exciting, I was anxious, and a lot of different things were going through my mind, but the main thing was the joy of playing, and that’s something I missed for the last 10 months.”

It was also an unforgettable performance with a legendary flare reserved for a Hollywood movie script. But Pittsburgh experienced this before as NHL Hall of Famer and Penguins’ owner Mario Lemieux scored a goal and two assists during a comeback of his own, ironically a 5-0 win Dec. 27, 2000 against Toronto.

Crosby did it one better, which left Penguins’ head coach Dan Bylsma speechless and shaking his head.

“I don’t really have good words for it because it was special in a lot of ways,” Bylsma said. “He certainly showed the knack for coming up big when the spotlight is on.”

Crosby, from the outset, displayed the form and intensity that helped him dominate the league prior to his injury with 32 goals and 66 points, including a historic 25-game point scoring streak. The 2007 NHL MVP and 2010 Olympic gold medalist for Team Canada figured in on four goals Monday, including the first three of the game, while scoring the first and last markers of the night.

“Of all the games, this one was probably the easiest one to prepare for because it felt like I was waiting forever,” Crosby said. “There’s a lot of energy in store after missing that amount of time and it’s something I’ve been waiting for a long time.”

The first goal was the biggest relief for Crosby, who skated to the corner and let out a scream before he was mobbed by his teammates.

“Part of waiting to play is also waiting to hopefully get that first one, and it came pretty early, which was pretty nice,” Crosby said. “I was watching the replay and read my lips and hopefully everyone wasn’t reading lips at home.

“I was pretty excited and couldn’t hold that in.”

Crosby played 21 shifts and saw 15:54 of ice time, registering a game-high eight shots and winning 14-of-21 faceoffs. Seven of those shifts came in the first period as Crosby logged 7:10, had four of the Penguins’ 12 first-period shots, and won five of seven faceoffs.

He didn’t have any problems shying away from contact either, battling for loose pucks along the boards and behind the net with the fire of a player who didn’t look like he missed more than 10 months with a career-threatening concussion.

The biggest test came midway through the first period when Islanders defenseman Travis Hamonic sent Crosby to the ice with a hard hit near the boards. Crosby didn’t seem to mind, quickly returning to his skates to the delight of Penguins’ fans and the rest of the hockey world.

“I was mad at myself for putting myself in that position,” Crosby said. “I was a little flat-footed, standing straight up, and a pretty easy target.

“But once you get to the bench and realize everything is OK, that’s always a good feeling.”

The fans were just as happy to see Crosby.

They arrived early to catch a glimpse of the returning superstar as a half-filled Consol Energy Center roared when Crosby hit the ice during the pre-game warmup, while Aerosmith’s “Back in the Saddle” played.

Excitement intensified as the game drew closer, resembling a playoff atmosphere with fans cheering throughout a pre-game video of Crosby highlights that ended with the Penguins’ captain hoisting the Stanley Cup.

“I went out for warm-ups, which is something I don’t normally do,” Bylsma said. “Usually I’m staring straight forward when players come out, but I wanted to see the reaction when Sidney stepped onto the ice.”

The 18,571 in attendance, displaying “Welcome back Sid” signs, erupted with an earsplitting ovation when Crosby took the ice for the first time in 320 days, reaching a decibel level heard all the way to Cole Harbor, Nova Scotia.

“I expected people to be loud, but that was far beyond what I expected,” Crosby said. “It was pretty amazing and pretty special too. It was an unbelievable ovation and I appreciate it.”

Crosby won the opening faceoff and nearly set up linemate Chris Kunitz during an opening shift eerily similar to Lemieux’s comeback in 2000 when he assisted on Jaromir Jagr’s goal 33 seconds into the game.

Crosby needed just 5:24 to score his first goal on his first shot of the season.

Crosby, rushing through the neutral zone, blazed past Islanders defender Andrew MacDonald before ripping a backhander over the shoulder of Anders Nilsson, sending the crowd into a fever pitch with chants of “Cros-bee, Cros-bee.”

“They appeared flat-footed at the blue line so I just tried to get up on the play,” Crosby said. “I was able to get some good speed built up and when I got it I knew I had a chance to go wide and get a good shot away.”

The Penguins’ captain drew a cross-checking penalty on Milan Jurcina soon after and nearly set up a power play goal. Crosby, returning to his familiar position along the right-side boards, sent a one-time feed to Evgeni Malkin, but he hit the post. 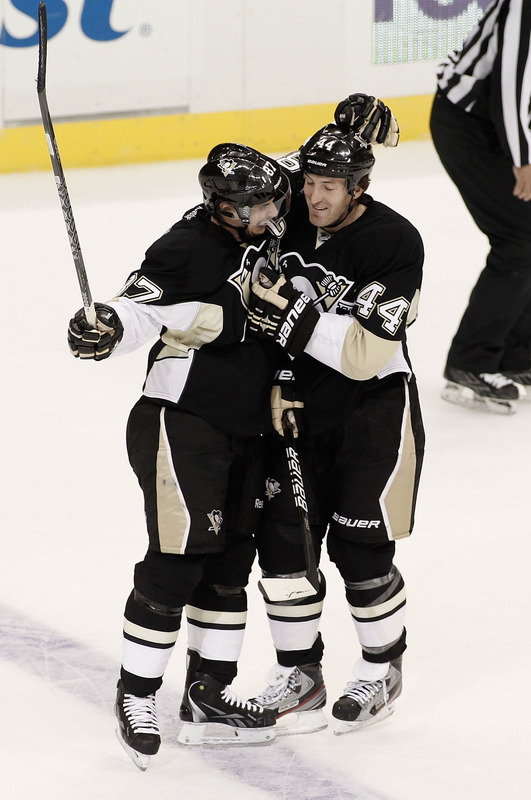 It didn’t take long for Crosby to register his second point of the period, as the Penguins’ captain dished a backhand pass at the blueline to defenseman Brooks Orpik, who rifled a shot over Nilsson’s blocker.

Crosby later figured in on his first power play goal of the season when he was credited with the second assist on Malkin’s sixth of the year.

Steve Sullivan added his second of the year, and first on home ice, on a backdoor tap-in from Malkin to make it 4-0.

But Crosby capped his return, and his comeback night, with the final goal. Crosby spun off a hit from Jurcina along the boards and threw a harmless looking shot that fluttered behind Nilsson 2:06 into the third.

The four-point night raised questions on whether or not Crosby could catch Toronto’s Phil Kessel and win the NHL scoring title, much like Lemieux passed Pat LaFontaine in 1993 when he returned from Hodgkin’s lymphoma. Crosby, with four points, is 25 points behind Kessel.

“I’m not going to make a prediction on that,” Bylsma said. “We have 61 games left and his pace is pretty good right now.”

The Penguins played with their trio of superstar centers — Crosby, Malkin, and Jordan Staal — in the lineup for the third time in two seasons. Bylsma also used Crosby and Malkin together during a four-on-four situation and added Penguins’ leading scorer James Neal to an even-strength line late in the game.

Goaltender Marc-Andre Fleury made 29 saves for his 21st career shutout, one behind Tom Barrasso, leaving some to wonder how far this team can go with everybody healthy.

“It was a different feel having (Crosby, Malkin, and Staal) out there,” Bylsma said. “It’s a feel I hope to get used to.”

It’s been a long road for Crosby, who hasn’t played since taking head shots in consecutive games in January against Washington and Tampa Bay.

He sat out the Penguins’ loss in the opening round of the playoffs to Tampa Bay and rumors of retirement were rampant throughout the summer as Crosby, during a September press conference, spoke of enduring painful migraines and dealing with fogginess that made it difficult for him to drive or watch television.

But Crosby began training camp, practicing with the team before he was cleared for contact in October. Then, on Sunday, came the message of Crosby’s return — the announcement the hockey world was waiting for. So much that the game was broadcast throughout the United States and Canada on Versus and the CBC and an estimated 250 media credentials were handed out.

Crosby made sure to deliver in his first game back.

“It’s Sidney Crosby,” said Penguins’ forward Matt Cooke. “The guy loves the stage. He loves to play and he’s one of the biggest competitors, not just in hockey, but in everything he does.”