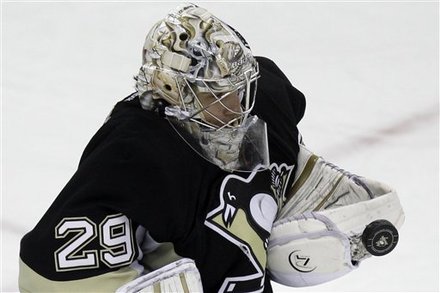 Dan Scifo takes a look at last night’s Penguins’ game, which saw the Birds roll to a sixth consecutive victory.

Two quick first-period goals were all the Pittsburgh Penguins needed to get past the Phoenix Coyotes.

Fleury was spectacular, stopping 36 of 37 shots to carry the Penguins to their sixth straight victory, defeating the Coyotes, 2-1, Monday night at the Consol Energy Center in Pittsburgh.

“He was our best player tonight,” said Penguins’ head coach Dan Bylsma. “I thought the Coyotes played a really hard and fast game against us and had a number of great opportunities in which Marc-Andre was extremely strong on.

“He was our best player tonight, he needed to be, and he has been solid.”

Has he ever. Fleury has won six straight, stopping 163 of 168 shots for a .970 save percentage in his last five starts. Fleury, who has appeared in 54 of the Penguins’ 65 games, earned his 35th win, one behind Nashville’s Pekka Rinne for the league lead.

“He’s played a lot of games for us, but the consistency in which he has played has been the biggest thing,” Bylsma said. “He’s solid every night in what he’s given our team and tonight he was probably the difference in the game.”

Two first-period goals gave Fleury all the support he needed.

One came from former Coyotes’ defenseman Zbynek Michalek, who victimized his former team with his first goal in 38 games midway through the first.

“It’s been awhile, but anytime you score it’s a good moment,” said Michalek, who spent five seasons in Phoenix. “It was a big goal for us because they were coming hard at us and momentum was on their side.”

The Penguins, who have the Eastern Conference’s best record against the West at 12-2-3, defeated their fourth straight Western Conference foe. Pittsburgh has gotten goals from seven different players, outscoring the opposition 7-2 during victories against Colorado and Phoenix.

Chris Kunitz scored his 19th of the season 3:01 after Michalek’s goal, beating Coyotes’ goaltender Mike Smith with a sharp wrist shot from the faceoff dot. But Michalek’s second of the season, and first goal since Oct. 17 at Winnipeg, had everybody buzzing. 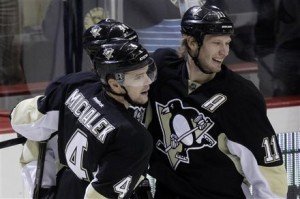 “I think he’s scored every time he played (Phoenix), so apparently he has something a little extra,” Bylsma said of Michalek, who admitted to rarely paying attention to scouting reports on opposing goaltenders.

“He needs to do a little better mental preparation in our scouting report and pretending we play against Phoenix more often.”

The light-hearted Bylsma was more impressed with Michalek’s defensive efforts after 39-year-old Ray Whitney scored his 21st of the year 1:27 into the third, trimming the Penguins’ lead to a goal.

Michalek helped kill a key third-period penalty and was also on the ice during a 5-on-4 situation with Smith pulled as the Pacific Division-leading Coyotes, who dropped their third straight after going 11-0-1 in February, desperately pushed for the tying goal.

“He was probably a bigger help on the defensive side than the offensive side,” Bylsma said.

Fleury, who has allowed 10 goals during the Penguins’ six-game winning streak, was the biggest defensive star of the night.

Some of Fleury’s finest work came in the second period when he turned aside 15 shots, including several during a tense net-mouth scramble. Fleury also came up with a spectacular stacked-pad save on Martin Hanzal racing out to the slot to deny the Coyotes’ forward during a short-handed opportunity.

“I think I saw him with his head down for a little bit, so I thought I would surprise him,” Fleury said. “On the way there, it felt pretty long, but it turned out all right.”

The Penguins, thanks primarily to Fleury, have also fared well during the recent six-game win streak – the team’s second longest of the season.

“We’ve been winning, so that’s what matters,” Fleury said. “I just try to give a chance for our team to win the game. They’ve been playing great hockey in front, blocking a lot of shots and helping out.” 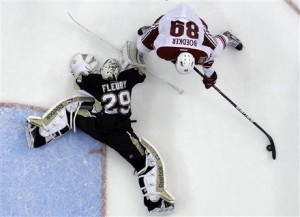 But Michalek credits Fleury for the Penguins’ success as the team currently sits in fourth place in the Eastern Conference with 83 points.

“He’s been great all season long as he’s the reason why we’re up there in the standings,” Michalek said. “You can rely on him every single night to make those big saves for us and he’s the main reason why we won tonight.”

NOTES:  The Penguins have won 10 of their last 11 home games… Evgeni Malkin tallied an assist and now leads the NHL scoring race over Tampa Bay’s Steven Stamkos with 81 points. Malkin, who is on an eight-game point streak, has 14 points in his last 16 games and 20 of 23… Malkin’s assist was the 499th point of his career as he is expected to become the ninth player in team history to reach 500 points… Jordan Staal’s assist on Kunitz’s goal was his seventh point in five games, which extended his career-best five-game point streak… Kunitz has 12 points in his last 11 games…Forward Tyler Kennedy returned after missing 11 games with a high-ankle sprain… Defenseman Kris Letang missed his second straight game with concussion-like symptoms.