The great Dan Scifo is back with another recap… this time he gives us the lowdown on the Penguins’ impressive victory over the Nashville Predators. 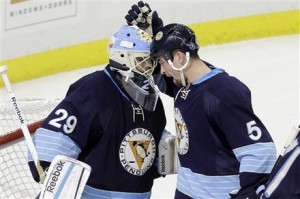 From the Point contributing writer

PITTSBURGH — The Pittsburgh Penguins are officially headed back to the playoffs.

And, given the way they’re playing right now, especially at home, that’s not a good thing for teams looking to hoist the Stanley Cup this season.

Evgeni Malkin scored two goals, including his 45th of the season, and goaltender Marc-Andre Fleury registered his 40th victory as the Penguins clinched a playoff berth for the sixth straight year with a 5-1 win against the Nashville Predators Thursday at Consol Energy Center.

“It was obviously our goal to make the playoffs from day one, but our goal is to be on top and be No. 1, so we have a ways to go,” said Penguins’ forward James Neal. “But if we keep playing this way good things are going to happen.”

Fleury, with his NHL-best 40th victory of the season, passed Predators’ goaltender Pekka Rinne for the league lead in wins. Fleury, who made 29 saves, is the first goaltender in Penguins’ history to record two 40-win seasons and is two victories shy of equaling Tom Barrasso’s franchise record for wins.

“He’s gotten 40 wins before anybody else and I think there’s a lot more to his goaltending than just us having a good team,” said Penguins’ head coach Dan Bylsma. “We have 46 wins and he has 40 of them.”

“I think it’s happened many times to Marc many times before and it’s going to happen again this year where a lot of his accolades go unnoticed or he doesn’t get a lot of credit for what he does for our team, but he’s been outstanding,” Bylsma said.

Fleury helped the Penguins again pull within one point of the Eastern Conference-leading New York Rangers. The Penguins, who need four wins in their last nine games to reach 50 wins for the second time in franchise history, are also three points from the St. Louis Blues, who lead the NHL with 101 points, but Bylsma isn’t focused on the Presidents Trophy as much as he is the Stanley Cup.

“Getting into the playoffs and putting yourself in position to win the Stanley Cup is our goal, not getting first in the league in points,” Bylsma said. “We’re going to keep trying to get first in our division.”

The Penguins, 13-0-1 at the Consol Energy Center since Feb. 19, won their ninth straight game at home for the first time in 13 years. Pittsburgh, which has outscored the opposition 39-14 during the streak, last won nine in a row at home during the 1999 season. 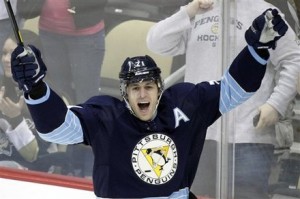 Malkin’s two goals put him two away from a career-best 47, scored during the 2007-08 season. It’s also just five from Steven Stamkos, the league leader, with 50 goals.

“The way Geno’s playing, with nine games left, it’s certainly not out of the question, but I think you’re talking about Steven Stamkos, who is an unbelievable goal scorer,” Bylsma said.

Still, Malkin, the Hart Trophy favorite for league MVP, has a firm grip on the Art Ross Trophy for the NHL lead in scoring with 95 points, 11 ahead of Stamkos and 10 ahead of Philadelphia’s Claude Giroux.

“He’s playing unbelievable,” said Neal, who is Malkin’s linemate. “From day one he’s been like that, so I just try to get him the puck as much as possible.”

It worked on Thursday. Neal, who had a hat trick Tuesday against Winnipeg, tallied a career-best four assists Thursday and now has 76 points, tied with Toronto’s Phil Kessel for fourth in the NHL scoring race.

Pascal Dupuis, Chris Kunitz and Matt Cooke also scored for the Penguins, who are 25-4-2 in their last 30 games.

“When things are going good, it’s going to look easy, but by all means, it’s hard work and doing little things right,” Neal said. “We’re having fun and doing the right things. Every line is playing well and when you’re doing that it helps the team out a bunch.

“Everybody is fresh at all times, we try to come at them every shift as hard as we can and we started that off right with the first shift tonight.”

The Penguins, who scored four goals on their first 14 shots, made it look easy, racing out to a quick 2-0 lead with a pair of goals in the first 4:06 from Malkin and Dupuis.

Malkin, who scored in his fifth straight contest, notched his 44th 1:23 into the game, blistering a slap shot that hit a stick and fluttered behind Rinne.

Dupuis struck with his 22nd of the season 2:18 later, extending his career-best eight-game point streak after he got a piece of Kris Letang’s shot from the point.

The Penguins scored two more times in the first 7:35 of the second period, stretching the lead to 4-0.

Malkin forced a Predators’ turnover, allowing Neal, on a two-on-none, to slide a soft pass to Cooke, who flipped his 17th of the year behind Rinne.

Kunitz scored his 22nd of the season five minutes later when his attempted pass to Sidney Crosby along the far post hit off the skate of Predators’ defenseman Shea Weber and caromed into the net.

Crosby, who has nine assists in five games since returning from missing 40 games with concussion-like symptoms — and 21 in 12 games this season — was held without a point on Thursday. He hasn’t scored a goal in 12 games, but it didn’t matter with the way Malkin and his teammates were rolling. 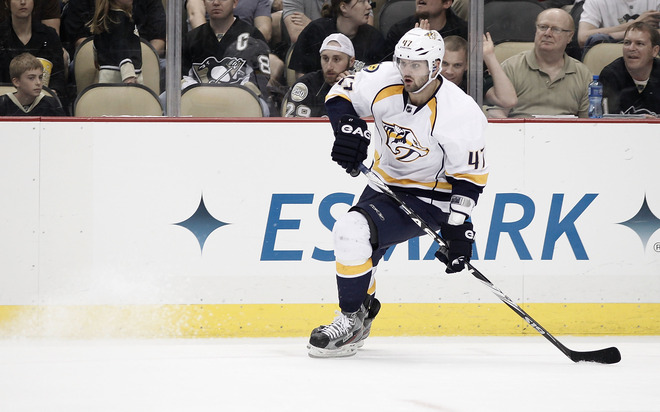 Nashville’s Alexander Radulov, the 15th overall pick in 2004, who has played in Russia’s KHL the previous four seasons, finishing as the league’s career goals leader, scored in his return to the NHL, but it wasn’t enough to match Malkin, his fellow countryman who unleashed a slap shot behind Rinne 2:03 into the third period to cap the scoring.

NOTES: The Penguins are 42-7-3 at home in March and April since the 2006-07 season, including a perfect 6-0 mark this year…Dupuis has seven goals and three assists during his eight-game point streak and 20 points in the last 23 games…Letang has 13 points in his last 14 games…The Penguins are 19-1-1 when Dupuis scores and 20-2-3 when Letang registers a point…Kunitz, who hit 50 points for the fourth time in his career, has 18 points in 19 games…Former Predator Steve Sullivan has 19 points in 25 games and defenseman Brooks Orpik has six helpers in 11 contests…Last season, the Penguins finished with 49 wins, tied for second-best in team history…The Penguins finished the season 9-3 wearing their dark blue Winter Classic third jersey…The Penguins, who won only three times in the last 11 meetings with Nashville, are 17-2-5 in the last 23 game against the Western Conference, including a 16-4-4 mark in home tilts…Nashville is the final NHL team to visit the Consol Energy Center.