Dan Scifo gives us another view on the Penguins huge win over Washington Sunday afternoon — their sixth in a row. 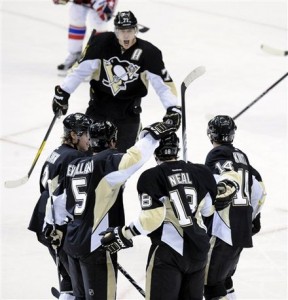 PITTSBURGH – The Pittsburgh Penguins, trailing by a goal in the third period, needed a big play to not only keep their season-long win streak intact, but also put an end to a pesky losing streak against a hated rival.

Evgeni Malkin, like he’s done the entire season, took care of it all.

Malkin scored the game-winning goal in overtime and assisted on two others, including the third-period tying goal as he led the Penguins to a season-high sixth straight victory and their first regular-season home win against the Washington Capitals in four years, 4-3, Sunday afternoon at the Consol Energy Center in Pittsburgh.

“We’re just enjoying the game and having fun.”

Malkin should be having fun. He’s playing, arguably the best hockey of his career.

Malkin, who tied a career high with goals in six straight games, has nine goals and 13 points during the Penguins’ win streak and 11 goals over the last nine games.

He is the NHL scoring leader with 58 points and has notched 34 points in his previous 19 games dating back to Dec. 8. Recently, Malkin registered a natural hat trick against Tampa Bay, and two days earlier, scored the game-tying goal, and lone marker in the shootout during a victory against Montreal. 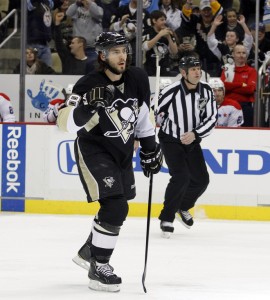 James Neal has been a big reason why, and, thanks, in part, to Malkin, the Penguins’ winger is having a career year of his own. Neal scored twice on Sunday and assisted on Malkin’s game-winner in overtime.

“We’re feeding off each other,” said Neal, who is tied with Malkin for third in the NHL with 26 goals. “Geno wants the puck and he wants to do good things with it.

“I just try to get him the puck with speed at all times.”

Malkin’s speed was on display during a spectacular individual effort on the game-tying goal. The Penguins’ center roared through the neutral zone, and split four Washington defenders, before losing the puck, only to recover, dig it out of the corner, and set up Neal, who flipped a shot over Capitals’ goaltender Michal Neuvirth for his second goal of the game.

“He drags guys to him,” Neal said. “He’s an unbelievable player and a lot of fun to play with.”

The Capitals’ nearly won it in the final minute of regulation, but Troy Brouwer’s rocket from the right side hit the post, sending the game into overtime.

That’s when Malkin and Neal took over.

Neal’s blast from the point early in the overtime missed the net, but the carom off the boards went to the far post, where Malkin flipped the puck into a partially empty net, giving the Penguins their first regular-season victory against the Capitals since Dec. 27, 2007.

“(Malkin) was playing with that fire and creating opportunities in what was a tough-checking game,” said Penguins’ head coach Dan Bylsma.

The Penguins’ recent six-game losing streak is all but a distant memory now that the team has reeled off six consecutive victories for the first time since winning 12 straight in 2010. Their last loss was a 1-0 defeat at Washington earlier this month, but it was anything but a setback given the way the team has played the last two weeks.

“I’m not looking at the last 12 games like we’re .500,” Bylsma said. “We left a few points on the table, but I think the way we’re playing right now, the response from the team, the mentality we have, that’s how we need to play to be successful.”

The Capitals, 12-1-3 in their last 16 regular-season games against the Penguins, hadn’t lost in Pittsburgh since the 2009 postseason and were trying for their ninth consecutive regular-season road victory in the Steel City on Sunday.

The Penguins were the ones to get off to a quick start, scoring twice in the first 5:52. 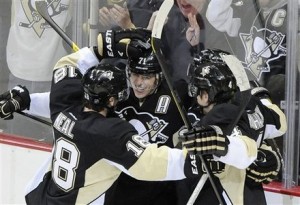 Neal struck 1:01 later, whipping a faceoff win from Malkin behind Neuvirth to give the Penguins a two-goal lead.

The Capitals, with just four first-period shots, were sluggish early, but Ovechkin increased the intensity and physicality with a questionable hit to Penguins’ defenseman Zbynek Michalek, giving his team life.

Mike Knuble’s backhand-forehand deke beat Marc-Andre Fleury, but the puck hit the post and slid underneath the Penguins’ goaltender.

Washington continued to surge, and the Capitals were awarded a 5-on-3 midway through the second period. Though a penalty negated the two-man advantage, the Capitals still converted four-on-four, making it 2-1 when Laich beat Fleury with a one-timer in front.

Ovechkin’s wicked one-timer from Semin 1:08 into the third period gave the Capitals their first lead of the afternoon.

“It was going our way, and I think we lost a little bit of our focus,” Letang said. “The penalties cost us momentum, and obviously a no-call on Ovechkin when he jumped and elbowed (Michalek).

“I think we got a little bit off our game.”

Lucky for the Penguins, Malkin, Neal, and linemate Chris Kunitz helped them get back on track.

“They’re a big line for us right now,” Letang said. “They come up big every night, pretty much. (Friday) night, they get the tying goal, and now to get the tying, and the winning goal.

NOTES: The Penguins finished with a winning record against the Capitals for the first time since the 2007-08 regular season… The two teams have played five straight one-goal games dating back to last season… Malkin now has seven game-winning goals. The franchise record is 10…Letang has three goals and one assist in three games since returning from a concussion.

*** In addition to his work here at FTP, Dan Scifo is the Assistant Sports Editor for the Latrobe Bulletin.