In listening to Sarge today, you really get a feel that he could be back in Black and Vegas Gold before it is all said and done.

Part two of today’s audio fix is upon you! 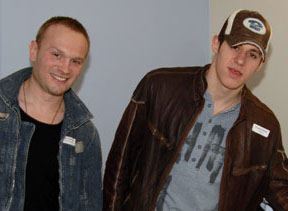 Going with the raw feed from the recording of the Sergei Gonchar scrum. Sarge was obviously a hot interview this afternoon as he is one of the most important veteran leaders on the team and his future in Pittsburgh is in doubt.

In listening to Sarge today, you really get a feel that he could be back in Black and Vegas Gold before it is all said and done. I know that Ray Shero has long stated that he was planning on getting Sarge back in the fold. The problem is that there is talk that he would like to be compensated on par with the $5 million per season average on his expiring deal. That just can’t happen based on the Penguins cap situation.

Sarge was quick to say that he loves Pittsburgh, the fans, his teammates and the fact that Pittsburgh gives him a chance to win. However, he did say that any deal would have to be fair for both sides. I am not sure which way this is going to go…where as two months ago, I figured this to be a slam duck done deal. I guess we shall find out.

Gonchar talked about the disappointment of losing the way he and his team did to the Montreal Canadiens. In an interesting segment of the interview he specifically addressed the Travis Moen goal that many, including myself, were very critical of.

He explained that he thought Moen chipped the puck into the corner and was curling off to get open for a pass from his partner. Unfortunately that puck didn’t make it anywhere near the corner and Moen collected it, shot it and scored a back breaking short handed goal. Gonchar also compared that play to one in which he received an interference call on during Game 6, which was on his mind when he decided not to play the body. As I said…interesting…

This scrum provided a moment of comic relief as well, as Gonchar’s phone started to ring towards the beginning of the session. He excused himself for a second while looking looking at it… Shelly Anderson of the Post Gazette asked if it was his agent, which drew laughter from us all. The laughing jag continued when he mentioned that it was actually “Geno calling”… and then specified “He’s in the next room…” before hitting ignore. Great moment…

As I said…sorry that the quality isn’t great on this, but I am getting the raw feed up there so you guys can enjoy right away!