Sidney Crosby will make his long awaited return to the ice Thursday evening under the bright lights in New York City at Madison Square Garden. 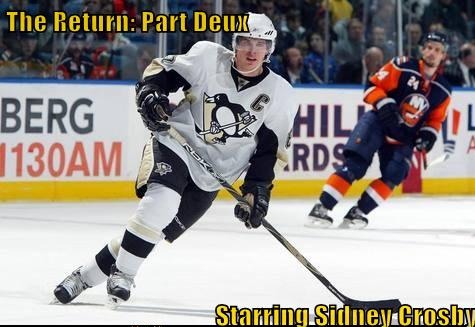 When Sidney Crosby made his FIRST long awaited return to the ice, no one really knew what to expect. Sure, we all figured that he would be Sidney Crosby, but very likely a scaled back version due to rust, after all he hadn’t played a game in upwards of ten months. He hit the ice at the CONSOL Energy Center and didn’t miss a beat scoring a highlight reel goal almost immediately and ripping off 12-points (2G-10A) in eight games before being knocked out of the line-up again by a David Krejci elbow.

That tease between late November and early December has to have everyone wondering what the “Kid” has in store for his next feature: “The Return: Part Deux.”

Based on what I have heard and seen around the team over the past couple weeks, I fully expect a whole lot more of the same. Not only has he been working on his conditioning and puck handling, shooting and passing, but he has worked on all of it harder than he normally would have, which really says something, considering the fact that his usual workout regimen isn’t for the faint of heart.

A colleague who travels with the team watched Crosby take to the ice for an hour with strength and conditioning Coach Mike Kadar following the team’s game day skate in Colorado a few weeks back and he skated harder than he had at almost any point during his return. It was an attempt to fully exert himself and to push the physical limits of his body as far as they would go.

The session left Crosby kneeling in a circle on the ice panting and exhausted, but it was a big test and one in which he passed with flying colors. It also served as the moment when most realized that his return was imminent and maybe even closer than expected.

Though there was nothing specific talked about at that point, the speculation ramped up to fever pitch. Would he be back in and around the NHL’s trade deadline? Would his return impact what Ray Shero would do? Would Sid, himself, serve as the team’s key trade deadline acquisition?

Then… he was cleared for contact on Mar. 6 — another big step. 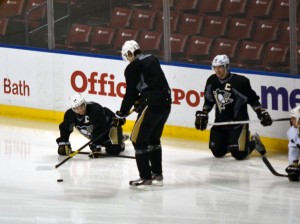 After the January controversy that saw news reports surface about possible dissention in the room between the rank and file and their captain and the ensuing taped on captain’s “Cs” that seemed to bring a “one for all and all for one” mentality back to the team, a ton of pressure lifted off of the shoulders of 87 – aside from the self imposed variety of course. He could focus on getting better and he did just that, climbing the mountain of recovery on a daily basis and reaching the peak this afternoon.

The Penguins find themselves in a pretty unique situation as “The Return: Part Deux” hits arenas around the league. They have rolled to a 21-4-1 record since the letters were taped on their jerseys and are currently riding a 9-game winning streak. Things are going so well for the squad as they head into a massive contest with the New York Rangers on Thursday night that Crosby is slated to skate with Matt Cooke and Tyler Kennedy on the team’s third line.

It is pretty amazing to think that a player who is arguably the best on the planet when he is healthy will be grinding out on the third line, but that is just fine with him.

Crosby knows what went into getting the team where they are today and that certain things have changed and or happened in his absence – lines were constructed, chemistry formed and he isn’t one to upset that balance. The guy just wants to win and will do whatever it takes to make that a reality.

I am not making any predictions, as it would be foolish to do so right now, but I will say this – the team has a special feel to it. Getting Crosby back in the mix only adds to that vibe. They went through a ton of adversity, not only in the form of injuries, but they might have started to doubt, or even question one another and they worked through it.

The “room” has always been a fun place to be around, guys chirping, hanging out etc. Heck it wasn’t even all that bad after losses, but this year during the middle of the season, during the six-game losing streak, it just didn’t feel right. It seemed like it might have sprung a leak and maybe even sustained a much bigger breach but that is gone now.

These guys got behind their convalescing captain, got some huge performances from Evgeni Malkin, James Neal, Jordan Staal and Marc Andre Fleury and somewhere along the way got their mojo back. Sid’s actions started the healing and the guys in the room did the rest over the past eight weeks.

The hard work has paid off for all involved and it all culminates in the premiere of “The Return: Part Deux” on the ice at Madison Square Garden on Thursday night and personally, I can’t wait to watch how this version plays out over the next 14-games and who knows… maybe even the next three months.