Sidney Crosby was in better spirits than I thought he would have been on Friday morning when we got our final crack at the Penguins’ captain. 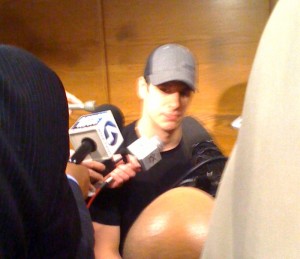 Sidney Crosby was in better spirits than I thought he would have been on Friday morning when we got our final crack at the Penguins’ captain. Though he seemed disappointed about the outcome of the series against the Canadiens, he was pretty optimistic about the future of his team. The one thing that stood out about Crosby was how tired he looked. His voice was still very gravely, his eyes looked like he needed a vacation, which is exactly what he says he will do with the additional time he will have on his hands due to the early exit.

Crosby and his mates have played roughly 300 hockey games over the past three seasons, more if they represented their countries in the the 2010 Olympic Games. That is an awful lot of hockey for anyone, mix in the physicality and pressure of the back to back Cup runs and you have a recipe for some pretty fatigued men. That all seemed to take its toll on Crosby, which is precisely why he opted to decline Team Canada’s invitation to participate in the World Championships in Cologne, Germany.

As I mentioned above, Crosby intends to do some traveling, then will get back to the business of his off season training regimen. He will also be busying himself with getting settled into his new home, which is in the same part of Pittsburgh that he had been living in with the Lemieux family.

Crosby said he will probably pass on watching the rest of the playoffs, but did say that he is planning on tuning in for the evening that the Stanley Cup is presented. The man he raised it last spring says that there is “just something about watching the Stanley Cup raised” that he can’t pass on.

There weren’t a ton of great nuggets available in his scrum, though he mentioned that Bill Guerin has indicated that he would like to play another season. He also said that he would expect Sergei Gonchar to be brought back, but realizes that resigning everyone will not be an easy task.