The Staal-mighty Penguins win their third game in a row thanks in part to anothr strong performance from Jordan Staal and his line mates. 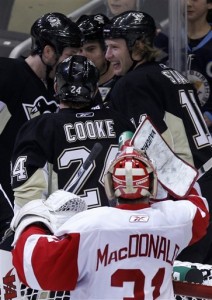 When Sidney Crosby went out of the line-up for the Penguins, most felt that it would be Evgeni Malkin who would rise up like a proverbial phoenix to keep them amongst the leaders in the Eastern Conference. Unfortunately it hasn’t quite played out like that for Geno, but they have gotten a handful of monster performances from their other star center, Jordan Staal.

Staal showed some signs of rust early in his comeback – fanning on some shots, missing an assignment or two in the offensive zone – but he was getting it done defensively. As the games rolled by, he began to look more and more comfortable and it all came together for him during the Penguins’ 5-2 victory in Montreal last Wednesday.

Staal was a dominant force in that game and has been for this team during its three-game winning streak. Over those three games he has accumulated 6 points (3G-3A), 8 shots on goal, and a plus-three rating. He also has been huge on the penalty kill and has logged big minutes against the oppositions’ top lines.

What should be pointed out is the fact that Staal’s resurgence has coincided with his being reunited with Matt Cooke and Tyler Kennedy. Though Staal has the pedigree on the line, the trio has some wicked chemistry – the kind that helped them become one of the best third lines in hockey over the past two seasons.

The line was vital to the team’s success against the Red Wings this evening, a team that is very much familiar with what the trio brings to the Penguins’ table. The unit combined for 4 points (2G-2A) and a plus-six rating.

The Penguins also got goals from Chris Kunitz and Chris Conner, both of which showed that this team indeed has secondary scoring. Conner’s was especially refreshing, as it showed off some skill that some in the building might not have realized that he had in his arsenal.

Conner put the Penguins up 2-0 on a penalty shot at the 11:29 mark of the opening stanza. He first used his speed to get in behind the defense and to draw the call and then showed off some flashy stick handling to beat Wings’ goalie Joey MacDonald.

Though the Wings came on pretty strong during the third period, the Penguins were able to hold them off and after a time-out closed out their third victory in a row. Something that we weren’t sure we would see when they blew a third period lead at home last week against the Boston Bruins.

This group is showing themselves and the National Hockey League that they can win without Sidney Crosby. Imagine the results when the Penguins captain gets back in the fold…

The Penguins are back in action Thursday evening against the New Jersey Devils.

Though Bob McKenzie of TSN was nice enough to break the news while all of Pittsburgh hockey media was watching the Penguins, Red Wings game, the Birds made the Mark Letestu signing official right before we were allowed access to the Penguins room. Letestu was understandably excited about his contract, but realizes that he needs to keep working hard to stay in the league.

Letestu could have opted for Unrestricted Free Agency as a Group 6 Free Agent this season based on certain criteria… here is the break down.

**Group 6 free agents (must be elected by the player): Players who have reached age 25, who have 3 accrued years of professional experience (that is, beyond junior or collegiate hockey), and whose contracts have expired, but have played less than:

Jordan Staal played the third most minutes for the Penguins: 22:40

Special thanks to my main man, Vinny Karpuszka, who is the main man behind the great music that you hear at the CONSOL Energy Center. When I arrived at the venue this evening, there was a care package of 4 amazing metal discs waiting for me. Thanks Vin!