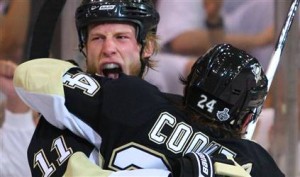 NHL hockey insider Bob McKenzie sent the hockey world into a frenzy at 5:01pm this afternoon when he broke the news that the Penguins’ Jordan Staal had turned down a 10-year contract extension to stay with the team. The report was quickly confirmed by Penguins’ beat reporters Dave Molinari fom the Pittsburgh Post Gazette and Josh Yohe from the Pittsburgh Tribune Review.

Soon after having the story confirmed, it began to grow. Darren Dreger, who works with Bob McKenzie over at TSN, was quoted as saying that the deal was believed to be in the 10-year, $60-million dollar range, which sent jaws dropping all over town. That dollar amount has not been confirmed.

Yohe went on to state in a later report that Staal has also told the Penguins that he would be open to signing an extension with the Carolina Hurricanes if a deal could be worked out, as he is apparently pretty intrigued by the possibility of playing with his brother Eric, who is the team’s number one center. The Staal’s parents also spend most of their time in the Raleigh area and younger brother Jared also plays in the organization.

Staal’s agent, Paul Krepelka, told all who checked in with him that he had nothing more to say than Jordan was “not prepared to sign an extension.”

It has been an interesting week in the Staal saga, as Ray Shero kicked things off on Monday by saying that he had no interest in trading Staal and that his intention was to keep his third line center for the long haul. Today’s news confirms that desire.

It is also worth noting that Staal has not asked for a trade, nor has he gone on record as saying that he wants out. However, the Staal-to-Carolina talk has been floating for quite a while now and it is pretty obvious that if he cannot play on the top two lines, he would like to head south and join his family in Raleigh.

Draft weekend in Pittsburgh was already filled with a number of storylines such as the possible Rick Nash trade, the Oilers plans for the 1st overall selection and now we have the Staal situation to sink our teeth into.

Sadly, it seems as if the end game in this situation will be a trade. Staal has made it known that he is ready for more responsibility, including time on the power play and being counted on in all situations.

If nothing else, the Penguins could stand pat and utilize Staal for one more season before trying to extend him again prior to July 1st or watch him ride off into the sunset. At this point, it is anyone’s guess as to what is going to happen…