Dan Scifo gives us his take on the Penguins ill fated attempt to close out their first round playoff match-up against the Tampa Bay Lightning. 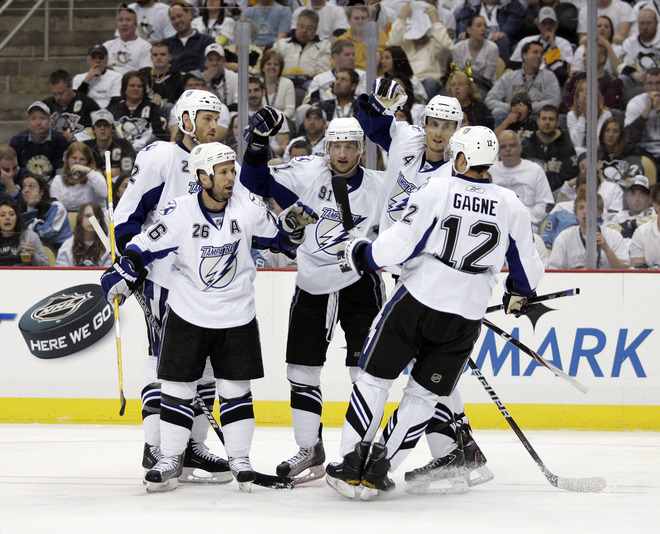 They couldn’t contain the duo forever. 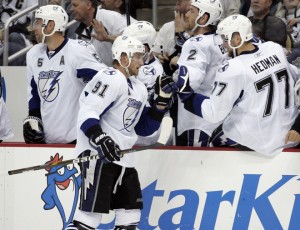 Stamkos and Gagne broke through in a big way during Game 5 Saturday afternoon at the Consol Energy Center in Pittsburgh as each scored two goals to help the Lightning stave off elimination with an 8-2 victory and close the gap in the best-of-seven series.

“I think after they got a couple goals we started coming unraveled a little bit,” said Penguins’ forward Mike Rupp. “We got behind and we couldn’t catch up.”

The Lightning, who have never rallied from a 3-1 deficit, look to tie the series Monday night during Game 6 at Tampa Bay. The good news for the Penguins is that road teams have won the past four games in the series.

The Penguins have generally been rock-solid defensively throughout the series, but they broke down as Game 5 proved to be their worst home playoff loss in franchise history.

The Lightning were able to get players to the front of the net and scoop up loose rebounds before Penguin defensemen could clear the puck. Including a 5-1 victory in Game 2, Tampa Bay has outscored the Penguins 13-3 the past two games in Pittsburgh.

“You have to win the battles,” said Penguins’ defenseman Paul Martin. “We have to be better around our own net and get a stick on a guy or try to clear those loose rebounds.”

The Penguins, under head coach Dan Bylsma, have won five playoff series in three seasons, but lost all five home games with a chance to close out a series. The Penguins, looking to advance to the Eastern Conference semifinals for the fourth straight year, have not lost in their last nine series when leading 3-1.

“We haven’t had a lot of success in Game 5, but then again it’s difficult to put a team out with the mentality of the team you’re playing and the desperation they’re bringing,” Bylsma said. “They’re playing for their last breath and they’re bringing that focus and mentality.”

Tampa Bay needed a little more than 10 minutes to score five goals on just 16 shots. Penguins’ goaltender Marc-Andre Fleury, who allowed four goals on 14 shots, was pulled at 5:31 of the second on Gagne’s second of the game.

“He’s been our MVP all season,” said Penguins’ forward Max Talbot. “There’s no doubt in anybody’s mind he’s going to respond for Game 6.”

Pavel Kubina scored twice in the third period; Vincent Lecavalier added a goal and an assist, and Martin St. Louis, who leads Tampa Bay with eight points, contributed two helpers. Dominic Moore also scored for the Lightning, who had 14 of 18 skaters register at least one point and eight more with two.

The majority of the largest crowd in Consol Energy Center history (18,535) filed out by the time Rupp chipped a shot past Dwayne Roloson’s blocker 6:36 into the third period to break the shutout. Chris Conner added another less than two minutes later as Roloson stopped 31 shots.

Roloson was at his best from the outset as the Penguins outplayed the Lightning in the opening 17 minutes and looked to close out the series in the first period.

Highlights included a Penguins‘ power play that produced plenty of pressure and four quality scoring chances, a Chris Kunitz wrister, sitting, untouched, in the crease before a Tampa Bay defenseman swept the puck away, and a Brooks Orpik blast from the point that hit the post.

“I think we came out with a good mindset,” Bylsma said. “We had things in our game that we like to see in terms of playing the right way and got action around their net.”

But the Lightning took advantage instead, scoring their first two goals on seven shots.

Gagne, set up by a pretty tic-tac-toe passing play between Lecavalier and Teddy Purcell, got Tampa Bay on the board, when he blasted the puck into a partially empty-net after it rang off the cross bar.

Stamkos, who had 45 goals in the regular season, notched his first of the playoffs 46 seconds later after he beat a pair of Penguin defenders in front and chipped a loose rebound behind Fleury.

Stamkos, held without a shot in Pittsburgh’s double-overtime win in Game 4, helped the Lightning add to their lead 1:55 into the second period. Stamkos won a race to a loose puck and found Lecavalier, uncovered for a one-timer past Fleury to make it 3-0.

“There was a stretch in the second period where we weren’t focused,” Rupp said. “When you’re not focused, the puck can get in the back of your net.”

The Lightning chased Fleury four minutes later as Gagne scored his second of the game after he put another loose rebound in the net.

Stamkos added his second of the playoffs 89 seconds later — and eight seconds into a power play — when he poked the rebound from an Eric Brewer shot behind Penguins’ goaltender Brent Johnson, who allowed four goals on 11 shots.

The Lightning finished 4-of-7 on the power play — including three straight with the man advantage — against the league’s top penalty killing unit in the regular season and are now 8-for-22 in the series. On the other hand, Pittsburgh finished 0-for-7 and are a dismal 1-for-25.

“That’s a big part in the series and something we knew going in, our penalty killing versus their power play,” Bylsma said. “Winning the special teams battle is a big part of keeping their big guys off the score sheet.

“A lot of their skill players get momentum there and it’s going to be big again in Game 6.”

Notes: Tampa Bay, which scored three goals five-on-five entering the series, notched four on Saturday… Kunitz and Steve Downie returned after sitting out Game 4 with suspensions. Downie had two assists and was assessed a 10 minute misconduct for roughing after a third-period incident with Orpik, who also received a penalty… Alex Kovalev registered his 100th career playoff point, assisting on Rupp’s goal… Bylsma revealed that injured forward Evgeni Malkin skated and is nine weeks into a four-to-six month rehabilitation program as he recovers from knee surgery.