A look back at the Super Star, Max Talbot… though he went cross-state, you can’t help but miss one of the most charismatic guys that has ever come through town. 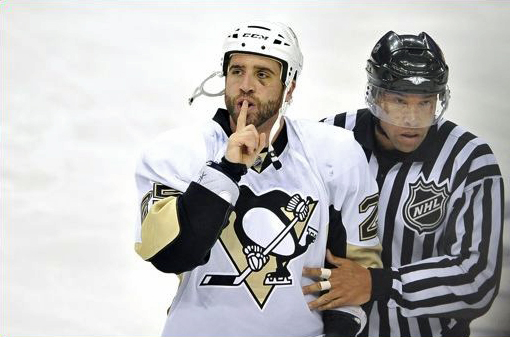 As we all know, Max Talbot, Stanley Cup hero and resident “superstar” has moved on to the Philadelphia Flyers and I can’t say that I blame him. Sure it is the cross-state rival and it did make losing the charismatic Talbot sting a bit more than it would have, but this was his chance to cash. Talbot spent six-years in Pittsburgh, made two appearances in the Stanley Cup Final, winning one of them and wasn’t going to get anywhere near the term or money that he got in Philadelphia.

It was pretty commonly known that Max was looking for extended years and more money on his next deal and I can’t blame him for that. Guys like Max, Mike Rupp and Rob Scuderi before them don’t get many opportunities to set themselves and their families up long term. This was his chance…

So, though it will be awfully strange to see him patrolling the ice in the Orange and Black of the “Broad Street Bullies,” I wish Max well in the future. He will forever be the guy that scored a huge goal to keep the Penguins alive in the epic Game 5 in Detroit in 2008, Shhhhh’d a raucous Flyers crowd during an unthinkable Game 6 comeback in 2009 and of course secured the ’09 Stanley Cup victory with two goals that many of us might not have known that he had in him.

Sure his play hasn’t necessarily lived up to those lofty expectations again, but the point is that he played his role well in the biggest moments and we should all be grateful for his contribution. We can also be grateful that we have a general manager that is comfortable making the tough decision on a fan favorite for the greater good. This will end up being a win, win for all involved. The Penguins will move on successfully and Max got his long term deal. Time will tell which decision was the better one…

As we close the door on Max Talbot’s time in Pittsburgh I wanted to share some of my favorite Talbot moments from the “Superstar’s” tenure with the Birds. Good luck “Superstar,” thanks for the memories and for being a part of the turnaround over the past six-years.

Enjoy the moments… feel free to suggest some of your own…

10/14/2005 – Talbot scores his first NHL goal in improbable fashion. I remember watching this game over some pizza and beer, as the birds were in Philly, and going nuts when one of the newest birds embarrassed the a more powerful Flyers team by scoring from what seemed like a million miles away. It was the first of Max’s Shhhes in the City of Brotherly love.

04/05/07 – In the second to last game of the season, one of which I watched later that evening due to attending Type-o-Negative’s final Pittsburgh concert before Pete Steele’s death, Talbot scored a huge game winning goal with 9.8 seconds remaining in the third period to knock off the Ottawa Senators. The Senators and Penguins were set to meet in the first round of the Stanley Cup Playoffs which began a week later and this win kept the Birds in contention for home ice advantage. It would be the Penguins first trip back to the playoffs since 2001.

06/03/2008 – Max Talbot, who seeming went unnoticed by the Wings defense (including Nick Lidstrom) as they tried to kill off the final seconds of what would be a Cup clinching 3-2 Game 5 victory during the ’08 Stanley Cup Final, bangs in the tying goal with just 34 seconds remaining. The goal set up Petr Sykora’s dramatic triple overtime winner and had the Penguins and the City of Pittsburgh believing that anything was possible as the series shifted back to Pittsburgh.

04/25/2009 – Though the Penguins were up three games to two in their first round series with the Philadelphia Flyers they found themselves down 3-0 with almost five minutes gone during a pivotal Game 6. It was starting to look as if the Fly Guys would knot things up and send it back to the ‘Burgh for a winner take all Game 7… that was until Max Talbot decided to change the momentum and to give us all a moment that will go down in history. Talbot “Shhhhhhoooooshed” the Philadelphia fans and sparked one of the most impressive comebacks in recent playoff history by goading “hot head” and former Penguins prospect Dan Carcillo into an ill-timed fight. Though Max sort of came up on the wrong side of the fight, he had done what he hoped and his iconic Shhhh will live on in Penguins lore for years to come.

06/12/2009 – The Penguins, who were eliminated by the Detroit Red Wings in the Stanley Cup Final one year earlier, got themselves a chance to return the favor. They forced a Game 7 at Joe Louis Arena and Max Talbot found a way to score his 7th and 8th goals of the playoffs. He set the first up by giving a bump to Wings dman Brad Stuart behind the goal, which sort of caused him to turn the puck over to Evgeni Malkin. Malkin flipped the puck to Talbot in the slot who threw it past Chris Osgood. Talbot was then on the receiving end of a pass that was the result of another Stuart turnover and he turned it into his second goal, which would go down as the Cup winner. Talbot streaked down the left wing and lashed a shot high glove side on Osgood and secured his place in Penguins and NHL history.

Max also became an accomplished actor in tv and commercials during his Pittsburgh tenure… his last great performance taking place during the epic 24/7 series on HBO, but his best work came in the iconic A & L Motors spots that always ensured that he received that “Super Star Treatment!”

Part two… there was another version that used Penguins jerseys without permission and was pulled.

Thanks again for the memories “Superstar” we’ll see ya on the other side!