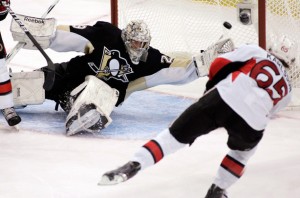 There are not many Senators players that inspire as much debate as Erik Karlsson.  You would perhaps have an argument with Jason Spezza, however leading the league in +- for a season….er…I mean being last in +- (or thereabouts; -30) for a season tends to bring out passionate naysayers. His 45 points, 12 of which were goals, tend to bring out equally passionate apologists.  When you see him on the ice, you completely understand both sides of the argument; if you are being objective.

Erik Karlsson is small by NHL standards and certainly by defenseman standards, specifically.  He is 6-feet-tall and 180 pounds (with a 40 pound ruck sack strapped to his back).  He is roughly 3 inches shorter and 35 pounds lighter than his average contemporary.  That he is in the NHL at all, let alone playing in his third season at age 21, is an anomaly of epic proportions.  The only player I can think of off the top of my head who compares with him from a size standpoint at that position is Kris Russell with St. Louis.

Karlsson gets run over in front of the net and on the boards, frequently.  He turns the puck over with alarming frequency in all areas of the ice.  These turnovers sometimes lead directly to goals for the opposition.  He also skates like no one in the game and has vision, instincts and a shot to match.  To some extent, his puck skills and instincts in playing the position make up for his lack of brute force.  Karlsson did not win the skating competition for the Senators in the skills competition; that went to Colin Greening, but put him in a game situation with the puck (or without it) and his acceleration and closing speed are simply unmatched.

I will admit that I have a built in bias against using the +- stat to detract from or support a players defensive abilities, especially where it applies to defensemen and specifically when taken out of context.  Citing +- is a frequent argument for those who say Karlsson is a bad defensive player and ineffective player in general.  Karlsson’s detractors will tell you that he was -35 as a 20 year old in the league, as support for their arguments that he is a detriment to his team and a bad defensive player.  I like to point out the Chris Pronger was -33 at the same point in his career.  I point this out not to suggest that Erik Karlsson will end up being Chris Pronger, but to suggest that judging a defenseman at this point in his career based on +- does not recognize that defense is the most difficult position for young players to master at the NHL level. 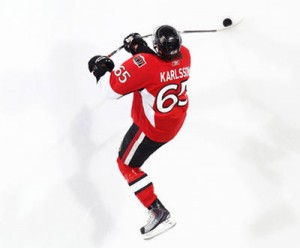 Next, I would like to point out that Zdeno Chara was +17 in his final year with the Senators, -21 in his first year with the Bruins and +14 in his second year with the Bruins. Chara’s play with the Bruins in that first year was scrutinized ad nauseum.  Did he put too much pressure on himself as Captain of the Bruins?  Did he play too many minutes as a result?  Was he just not as good defensively?  The answer to all of these questions is most likely ‘no’.  Chara is one of, if not THE most consistently good defensive players in the game.  What was the difference, you ask?  In Chara’s last year with the Senators, they outscored the opponent by 1.3 goals/game.  In his first year with Boston, they were outscored by .9 goals/game.  In his second year with the Bruins, they were, essentially even.  Which brings me to why it bugs me when people apply this stat to defensemen to scrutinize them; if you are a good, very good or great defenseman, you spend a lot of time on the ice and your +- is a direct reflection of what your team does around you, in addition to your contribution to the play.  Karlsson was -30 last year.  He is + 7 as I write this.  Is he really better defensively than he was last year?  His team was outscored by .75 goals/game last year and this year they are -.2 goals/game.  Perhaps that has something to do with it.  Perhaps he’s a year older and has learned a few things, much as Pronger had when he was +21 as a 21 year old.

Lastly, I would argue that much of his perceived “poor defense” was more a matter of “risky offense,” Karlsson (like Spezza) has played a high risk game when he has the puck. Much of that minus in the 2011 season was a result of him turning over the puck and giving the opposition quality chances.  While he might be incrementally better protecting the puck this year (and it is not by much), the difference is that 50% of those turnovers last year ended up in the back of the net and only 25% of the same chances are goals against this year.  He has a goaltender who bails him out from time to time and a better team around him (yes, I made up the stats for dramatic effect, but they are accurate, if not correct).  Like Spezza, we (Senators fans) all cheer when it works out and we get a scoring chance and we all groan when it is a gross turnover going the other way.

Karlsson has issues to overcome; not the least of which is his size.  He has a ways to go before he is a complete defenseman and he can be much more conscious of the dangers around him in his own zone.  But, there may not be a more dynamic defenseman in the game today and he compares positively to Paul Coffey (who was +61 in 1986 and no one would accuse him of being a good defensive player) and dare I say, Bobby Orr from an offensive standpoint.  Karlsson has 71 points in his first two seasons.  Orr had 72. Karlsson is on pace for just under a point/game in his third season, the same as Orr.   I am not going to suggest for a second that Karlsson is as good as Bobby Orr but I *will* suggest that what sets Karlsson apart from his contemporaries is exactly what set Orr apart; his skating, vision and instincts are simply unmatched at his position.