The Curse of the Pittsburgh Penguins rides on… 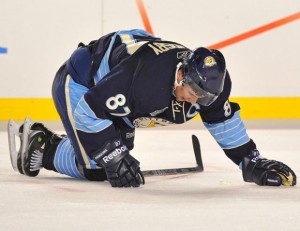 For those of you who thought that the “Curse of the Pittsburgh Penguins” lifted as the clock struck midnight on 01/01/2012, I have got news for you, it merely grew stronger!

First we saw Sidney Crosby make his triumphant return to the line-up, only to leave again 8-games later with what was originally only going to be a short term precaution – that wasn’t true. He has been out since December 5th and there are no plans for him to rejoin the line-up anytime soon.

Then it was time for the Penguins’ number one defenseman to go down, as Kris Letang exited the line-up after taking a Max Pacioretty elbow to the head on November 26th. Yes, I know it actually happened before Crosby’s exit, but in the grand time-line, I chose to go with the biggest injury first. 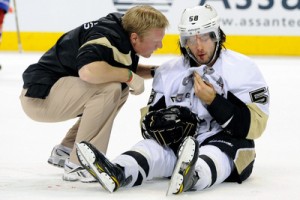 They somehow managed to overcome most of that to keep pace in the Eastern Conference. They always had a piece that could be plugged in, someone to offset the loss of another, but the depth is wearing thin.

Enter Sunday January 8th – the day that the season might have taken a turn towards a lottery pick.

The team announced that the Jordan Staal would miss 4-6 weeks with a knee injury that was caused by a knee-on-knee collision with Mike Rupp on Friday evening, James Neal – the team’s leading goal scorer would miss “weeks” with a broken foot and they may also be without the services of Craig Adams, who exited practice after falling awkwardly.

All of it leaves you shaking your head. How can one team overcome so many significant injuries? It probably can’t be done.

Penguins’ management isn’t the type to concede a season, especially when playoff revenue is so important to them staying near the cap ceiling, but is really worth giving up the assets that would be required to make an impact deal? I say no.

Though the team has accumulated a number of young prospects on the blue-line, it would be folly to give up a Simon Despres, Joe Morrow or Scott Harrington to pick a piece that may not guarantee anymore than a first-round exit. These are the moments in which no one envies Ray Shero.

At the end of the day this team may be a lot closer to selecting the likes of Nail Yakupov in June than celebrating a Stanley Cup Championship.