Things to look for as the Pens head into Tampa Bay for a match-up with the Lightning. 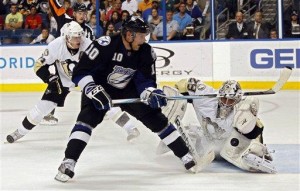 The Penguins are back in action this evening after missing a golden opportunity to pull into a first place tie with the Flyers for the Atlantic Division and Eastern Conference lead on Tuesday night. Though the loss was unfortunate, it isn’t something that they can afford to dwell on, especially considering that tonight’s opponent is creeping up on them in the standings.

The Tampa Bay Lightning are five-points behind the Penguins heading into this evening’s game and would love nothing more than to cut the margin between them to three.

As we all wait for face-off to “come at us” bro-style, here are some things to look for this evening.

How will the Penguins bounce back from what was a pretty emotional game on Tuesday evening? They obviously had some big carrots dangling in front of them as they entered the fray with the Flyers, but were not able to get the job done. They started well enough in scoring first and creating plenty of additional opportunities, but were unable to cash in. Though Sergei Bobrovsky played well for the Orange and Black, it was the Penguins’ inability to hit the net and or shoot the puck often enough that seemed to go down as their undoing. That cannot be the case this evening.

The Penguins have gone 2-1 against the ‘Ning this season and have outscored them 16-7…which includes an 8-spot that the Birds put up on them back in January.

Can MAF get the “dirt off his shoulder?” Fleury has done a great job of following up poor outings with strong ones this season and I would think that would again be the case this evening. I realize that he cannot be held accountable for at least three of the goals that were scored against him, as they came off of crazy bounces, but he is still dealing with the mentality of allowing five. He was looking to the heavens after a couple of them and will want to redeem himself tonight.

The Lightning can clinch a playoff spot with a victory over the Penguins this evening. That is typically pretty big motivation for a team, so I would expect a good effort from the boys in Tampa. The Lightning’s efforts will be bolstered by the return to the line-up of Pittsburgh’s own Ryan Malone. Look for the Pittsburgh Kid to have a strong outing against his former and hometown team.

Speaking of the Playoffs… could a potential 4-5 first-round match-up be getting underway this evening? If the playoffs were to start today the Penguins would face the Lightning. The Birds are in that 4th slot and would hold home ice advantage in the series. Though Dan Bylsma that he hadn’t even thought about the possibility of this being a playoff preview, we all know that it very well could be. Watch for the emotions to pick up as the game rolls on.

Steven Stamkos and Marty St. Louis… heck, even Vinny Lecavalier. All three have done their share of damage against the Penguins over the years — especially the latter duo. They will be key in any success that the Lightning have this evening.

I am still feeling froggy for the “Fruit Bat.” Look fro Tyler Kennedy to notch another goal this evening… on the Lightning side: Sean Bergenheim .

Last but not least… watch for a new swagger, confidence etc around the Penguins. I am expecting them to have a new found fire in their eyes now that Sidney Crosby has rejoined them on the road (at least for this trip). Though there is no timetable for his return, just having him around the team seems to provide a spark. They have done a masterful job of keeping pace with the top dogs in the conference during his absence and will want to keep it rolling with him in the house.

Check out this interview Rob Rossi was able to snare with Sidney Crosby following his first game day (no-contact) skate with the team since January. Ironic that Sid would make his first trip with the team to Tampa Bay… the last team that he laced them up against back in January — a game in which he took a bump from Victor Hedman that likely added to his concussion woes.

And because this is my site and all… “I dooo whaaaat I waaaant!” Check out this nifty Crosby video I came across today. Seeing this footage really makes you appreciate what we have in the kid! Wowie, have I missed seeing this kind of stuff on a nightly basis…