The Penguins got back to their winning ways this evening on the power of good team defense and timely scoring from Pascal Dupuis, Mark Letestu and Dustin Jeffrey. 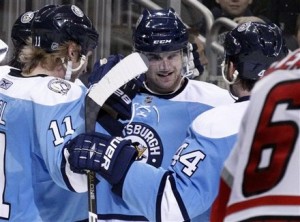 I am a bit behind in getting some post game thoughts up following the Penguins victory over the Carolina Hurricanes. Rather than get into a typical post game story, I figured I would just give you a few quick hits and observations from the night.

First of all, it was nice to see some of my blogging cronies in the house. The Penguins have been very forward thinking in their handing of bloggers and they have opened their doors to a handful of them this season. First off, they have credentialed a handful of the boys for the entire season, but they have also sponsored a number of blogger nights throughout the year and tonight was one of them. Tony Ferrante (The Confluence), Jesse Marshall (Faceoff Factor), and Derek/Adam (The Pensblog) were in the house… cool to say hello, as I don’t see any of them near often enough.

I also got to meet a couple of my favorite XM Radio personalities with whom I have worked for a number of years, but had never met in person. Jim “Boomer” Gordon and Joe Thistel were in the house as they are attending the Steelers’ AFC Championship Game tomorrow afternoon. It seems that Boomer won the trip by winning a giant Fantasy Football contest. He credited Arian Foster for bringing them the victory and a chance to come through the Burgh this weekend. It was great to catch up with them and chat a bit… however; we should have a great opportunity to do some work together next week as we will all be taking in the All Star festivities in Carolina.

As for the game, it was an underwhelming one through one period, as the neither the Penguins nor Hurricanes looked as if they were in the game. That all changed during the second period, as the game opened up quite a bit and the teams exchanged chances.

Dustin Jeffrey opened the scoring shortly after the Canes thought that they had registered the go ahead goal. Jeffrey got the puck just above the right face-off circle and lashed a shot past Cam Ward.

The Canes chance came on an Erik Cole shot that glanced off of Marc Andre Fleury’s stick before ricocheting off of the cross bar. In real time it looked like it might have gone in the net and immediately come out. Video replays ensured that the puck did not cross the line and the goal was waived.

Jordan Staal had another strong game for the Birds. He seemed to be fighting the puck on a couple of the shots that he was taking, but he was distributing it well as evidenced by his great pass to spring Pascal Dupuis for a goal during the third period. Staal made a couple of great defensive plays including a big blocked shot late in the game to preserve the Penguins victory.

Dustin Jeffrey is really starting to look like a player that should be on the NHL roster full time. Sure he has his moments of looking a bit overmatched, but he is looking like a viable option on the wing moving forward. The team moved him to the wing to build their depth at the position and he has thrived since the change. He is also a very grounded, well spoken kid who is a dream to deal with in the room. I caught up with him post game… here are some of his thoughts (following a couple of answers he gave Mark Madden.)

Arron Asham had one of his finest games as a Penguin. He worked his tail off in all three zones, fought for loose pucks, put shots on net and made the Penguins very tough to play against. Games like tonight show you why Ray Shero brought him into the fold. #WARDANCE

Mark Letestu is looking more and more like a steal at $625,000 per season. He has shown a nice offensive touch and would make a great third line center if the Penguins want to build their top three lines around Crosby, Malkin, and Staal. His goal tonight showed patience, touch and a keen shooting eye. He shot the puck across his body towards the far post as he streaked down the right side of the slot.

Marc Andre Fleury played another solid game, though I think he should have stopped Sergei Samsonov’s third period tally. The Penguins’ goaltender could have ten shutouts this season if he could find a way to keep the late goal bugaboo from popping up time and again. Don’t get me wrong, not beating him up, especially because his teammates do him no favor late in games, but he needs to be better late in games.

Speaking of being better late in games, tonight had many of us on the edge of our seats as the Penguins again allowed a 3-0 lead with less than five minutes remaining to turn into a 3-2 game. It is unbelievable how often that has happened to them this season. It was great to see them stop the bleeding though, as it would have surprised no one to see them head to overtime after the Canes got on the board.

Dave Molinari of the Pittsburgh Post Gazette is reporting that Sidney Crosby is indeed going to miss the All Star Game. He gets his info from an anonymous source close to Crosby…normally I would take this with a grain of salt, but Dave is a Hall of Famer and rarely reports that kind of info unless it is solid. Also, it makes complete sense…he isn’t healthy enough to play real games; he shouldn’t play in an exhibition.

FYI – I would hold Malkin out as well.

There was a heavy Steeler influence in the building tonight as the two teams support each other often. Renegade was played several times throughout, the three stars hit the ice with terrible towels and Marc Andre Fleury skated out with a Steeler helmet on, as he did a couple years back prior to AFC Championship victory over the Ravens.

That about sums it up… stay tuned for more tomorrow…