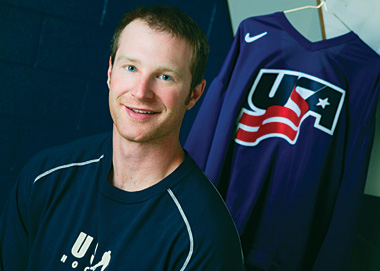 Jordan Leopold showed the 17,132 who watched the Penguins knock off the Philadelphia Flyers this afternoon the versatility that made him a trade deadline target for Ray Shero. He stepped into Sergei Gonchar’s defensive pairing with Mark Eaton, played on the power play and killed some penalties. He finished the day with 1 assist, 1 shot on goal and one blocked shot. He picked up 18:44 of ice time, which is a bit more than he is used to playing for this team, but didn’t look out of place doing so.

I had a chance to catch up with Leopold following today’s victory to chat about his first dose of the Pens/Flyers rivalry, his performance and getting acclimated to Pittsburgh.