Personally, I am always intrigued by goaltenders…especially young ones and I wanted to catch up with Patrick Killeen to see what his expectations were coming into this season. 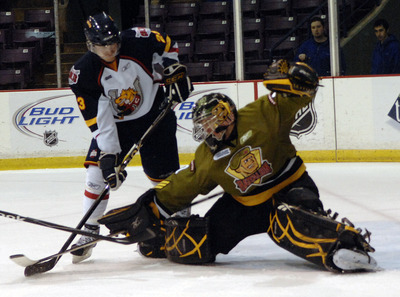 Well lookie here, another edition of Two Minutes With…

I know it is shocking.

I know that there are times when there are weeks or even months between TMW, but one of the bonuses of a prospect camp such as the one that the Penguins are running right now is that you can have a ton of access to players that you might not normally have. Plus, a guy like this editions’ interviewee wasn’t exactly in demand by the gathered masses.

Personally, I am always intrigued by goaltenders…especially young ones and I wanted to catch up with Killeen to see what his expectations were coming into this season. Especially when you consider that the Penguins are not exactly overflowing with goaltending depth. Yes they are set for years to come at the NHL level, but there will be jobs available at the Wheeling and WBS level.

Killeen is coming off of a season in which he posted a 23-25-13 record, 2.42 goals against average, .913 save percentage and 5 shut outs for Brampton in the OHL. The youngster seemed to get stronger as the season wore on but had his finest stretch in February when he was named the OHL’s goaltender of the month.

The Almonte, ON native is hoping to adjust to the pro game this year after inking a three year entry level deal with the Penguins back in April. He understands that there are some veterans ahead of him on the depth chart, but hopes that he can make an impression during the current prospect camp as well as the full camp that kicks off in September.

Killeen, like Brian Strait before him, was very complimentary of the organization. He also filled me in on the fact that the group was going to take in some paint ball as well as a Pirate’s game. I tried to warn him off, but he was excited to see some baseball considering that he hasn’t been to a game since an Expos affair when he was “9 or 10 years old.”

Enjoy two minutes with Patrick Killeen. Warning…this is also a bit beyond the two minute limit!