Wikipedia tells us that Superstition is:

“A credulous belief or notion, not based on reason, knowledge, or experience. The word is often used pejoratively to refer to folk beliefs deemed irrational. This leads to some superstitions being called “old wives’ tales“. It is also commonly applied to beliefs and practices surrounding luck, prophecy and spiritual beings, particularly the irrational belief that future events can be foretold by specific unrelated prior events.”

There is no doubt that we all have superstitions that help us get through moments in our lives. Who knows, you may have some superstitions that you aren’t even aware of. Maybe you always put your shoes and socks on right foot first? A morning ritual being derailed tends to derail your entire day…why? Superstition…

Your day should just be like any other, but if you don’t get things started the way that you “need” too, the day is ruined.

That adage holds true in professional sports, especially the game of hockey. Superstition is a key factor for getting the players, coaches and fans into the right mindset for victory.

Personally, when I played hockey on a fairly regular basis, no one could touch my sticks. It would just ruin it for me…I know it is completely irrational, but my shot would suffer and the feel of the twig just wasn’t the same. In most cases I would just give the stick away and get a new one, after all, it was ruined for me.

Those sorts of scenarios run wild in locker rooms at all levels of the game. Players follow a set game day routine…if something derails it; they are not in the right mindset for that evening’s game. It may be something as simple as a coach wearing a certain tie. Maybe that coach needs to indulge in an ancho chile burrito from a local Mexican eatery to get in the right mindset.

Players have long had superstitions that seem ridiculous to the casual observer, but to those involved they make perfect sense. For example, Patrick Roy would carry on conversations with his goal posts, he believed that they were his friends and helped him win games. He could be seen chatting them up and giving them a rub any time a puck would clang off of them. Marc Andre Fleury can be seen giving the posts a similar tap when they have helped him out as well.

Glenn Hall, one of the greatest goaltenders in history, believed that he could not win on any given night unless he vomited before the game. Weird, but it worked for him. He posted 407 victories and three Vezina Trophies.

Anyone who arrives at Mellon Arena early enough can vouch for the fact that Max Talbot is always on the ice in tennis shoes, shorts and t-shirt, shooting pucks at the net in the still dark arena. I first noticed it a few seasons back and it is a rare occasion that he isn’t out there.

Sidney Crosby, Sergei Gonchar and Evgeni Malkin bucked tradition and touched the Prince of Wales Trophy last season prior to the Stanley Cup Championship. They felt that they weren’t successful in the prior season when they held true to the superstition about not touching it and decided to grab away! 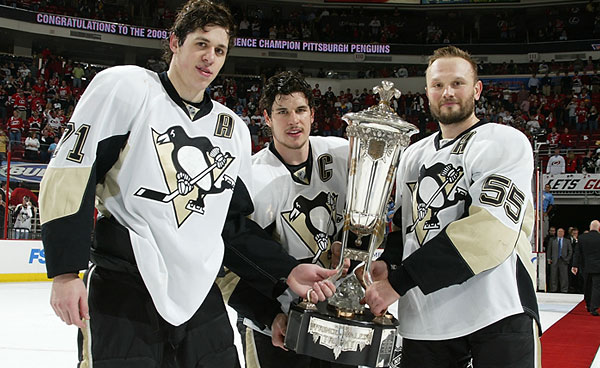 Generally speaking, hockey players and those around the game need these rituals to be successful. Though they don’t always make sense, they are the magical things that help spur the team on to victory, or help a player find success.

The folks off of the ice are no different. We all have things that we hold onto that we feel give the team a better chance at victory. Maybe you have a set jersey, shirt, hat, underwear, socks etc that you need to have on if the team is going to have a chance to win.

Last season’s run to the Stanley Cup Championship inspired many a superstition and considering that the Penguins are in a win or go home situation this evening, I felt that it was appropriate to bring them all out of the moth balls. We have slowly been bringing a few of them back, but this situation calls for everything that helped the run last year to again provide each and every ounce of its magic.

First off, the aforementioned burrito… let’s hope that Dan Bylsma is getting his lunch at Qdoba today, as the Penguins’ bench boss ate one of their signature overstuffed burritos for almost every victory of last year’s run. In fact, the folks at Qdoba even sent a couple up to Detroit so that the coach could indulge on the road and it helped secure the all important Game 7 victory.

Here is the blurb I wrote on the Burrito last season prior to Game 7 of the Stanley Cup Final:

Though it didn’t garner much attention until recently, Dan Bylsma has made a habit of finishing practice at the Mellon Arena and taking a walk down to the Qdoba restaurant at Grant and Sixth streets for a lucky burrito. It seems that the Burrito doesn’t do much for him — nothing except maybe push his team to victory. You see, the Penguins have won all but one game in which Bylsma has consumed the burrito.

“I always said I don’t have superstitions. I just like to do the same thing every day,” Bylsma said last week. “When you get into a routine, you feel comfortable and it gets you in the right spot for a game. When you do something and you get a win, you usually duplicate it again.”

Bylsma was at the restaurant yesterday to pick up his chili barbecue burritos — one hot, one mild – and they were packed in ice so that he could bring them to Detroit with him.

Two Parents, One Cup… we know it took them a while to get here this time around, but Evgeni Malkin’s parents have become cult figures in Pittsburgh. Their presence usually means that Geno Machino is going to do something special. Their influence might not have been felt just yet, but somehow I think that Mamma Malkin is whipping up a pot of her finest Borsht for Geno. That magical meal typically has him galloping through the neutral zone, bowling through the opposition, setting up teammates and scoring highlight reel goals.

His mom says (via the translation of Penguins sales account executive George Birman) that this is her son’s favorite.

Heat the oil in a skillet over medium heat. Add the beets, and cook until tender. Add the carrots, the white sugar and the raw garlic. Stir in the tomato paste and water until well blended. Add skillet contents to the soup and bring to a boil, cover and turn off the heat. Let stand for 15 to 20 minutes. Taste, and season with salt, pepper and additional sugar, if desired.

Ladle into serving bowls, and garnish with sour cream and fresh parsley.

China Jack… WE NEED YOU! China Jack was an amazing addition to last year’s run and his videos got better and better. Unfortunately, it seems that he has gone into retirement, but his influence is needed this evening. What I wouldn’t do right now to hear him talking about “Enfooooorcers like OOOOOrpik and Boooooooooucher.”

Hit it Energy… I think it’s a great day for hockey and you boys are the ones needed to provide the soundtrack. Your song might not have been as well known when it was written, but it has certainly become an important part of Penguins lore over the past two years.

The Benstonium Videos…Chris Benson has created some of the most amazing videos I have ever seen. They bring back unbelievable memories of the amazing moments that we have all experienced over the past two years. They are pure magic and have you believing that anything is possible with the Birds whenever you watch them. Here is his latest Pens Tribute…

Last but not least… Chanel, the world’s oldest dog. Unfortunately Chanel passed away not long after last year’s run to the Stanley Cup Championship, but she was an integral part of the win. You probably recall the story of how she came to be, so I will not waste a ton of time on the lore. However, you must know that every time the Penguins hit a rough patch during last year’s playoffs, she helped pull the boys through. I sneaked her into Game 7 in Washington last year and the Penguins blew the roof off of the place. My media crony Angela Carducci sneaked her into the Joe Louis Arena for Game 7 of the Final and we all know how that turned out. Chanel has lost a couple of games, but she has never lost a series…  just saying… What I am saying here is make sure that whatever rituals, superstitions; or routines that you typically run through on a game day are in full effect. Do not watch the game at a new venue. Do not change the jersey because of the last loss. Do what gotcha here…

If you are feeling froggy, please share your rituals, routines or superstitions with the group. I for one would love to hear what you do to help the team win on a night to night basis.

I leave you with this…

The above comment made by Herb Brooks 30 years ago applies to just about any team that has ever suited up for a game seven in the Stanley Cup playoffs. This is what these men dream of and what we as fans and followers of this wonderful sport watch it and cover it for.

This all comes with a pit in your stomach excitement level that you just do not feel with any other sport. Sure, playing for championships is always amazing, but the National Hockey League’s 82 game season and 16 wins or go home playoff schedule is so different. You live and die with your team…you feel what they feel…your heart aches when they lose and your spirits soar when they win.

Everyone in Pittsburgh and Montreal is experiencing that feeling right now. Tonight the season ends for one team and the other continues the long journey towards history and a little piece of heaven that they call the Stanley Cup.

Win or lose, tonight’s game is sure to be a magical moment that none of us is sure to forget…be it for good or bad reasons…