This moment obviously brought the memorabilia hounds out en mass. Both those who collect artifacts for their own menageries and those who profit by selling said artifacts. 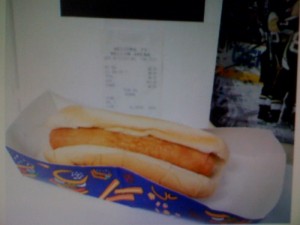 Mellon Arena hosted its final hockey game on Wednesday May 12, 2010. Of course the evening was bittersweet for most involved as it would probably be their last time in the old barn. Or at the very least, their last time to experience the special vibe that seemed to surround a hockey game in the building.

This moment obviously brought the memorabilia hounds out en mass. Both those who collect artifacts for their own menageries and those who profit by selling said artifacts. Game programs from the game are being sold for $9.99 at NHL shop and even more elsewhere.

Ebay is obviously brimming with a ton of listings featuring items from the “Final Hockey Game in Mellon Arena,” such as pucks, white out t-shirts, rally towels and more. All of it is pretty standard fare, however there is one listing that is just insane – a final game hot dog!

A friend of mine pointed it out to me yesterday and I had to look it up. The listing reads:

This hot dog was made May 12th 2010 during the last game ever to be played at Mellon Arena.

Im a huge fan of Penguins hockey and also a true collector of sports memorabilia. Im putting this Hot Dog on Ebay because this is probably the one and only Hot Dog ever to make it out of Mellon Arena during game 7. Game 7 was the last hockey event ever to be played in Mellon Arena and what better way to celebrate such an historic building?

Here’s what you get:

1 Authentic Stadium Hot Dog. (Hot Dog is sealed in zip lock bag and will remain sealed until it is delivered)
1 Receipt saying what the purchase cost for stadium Hot Dog was
1 Picture of the seat that was sat in when the Hot Dog was purchased. (This pic shows final score in Mellon Arena)
1 Ice TIME hand out that they gave when you walked in to Mellon Arena

The crazier thing is that the seller is asking $50.00 dollars as an opening bid. A bit steep if you ask me, but I guess it could be a unique addition to someone’s collection.

Interesting enough, the seller has warned against eating the hot dog, as if you aren’t tempting fate enough by engulfing the processed meat when it was fresh.

** This item is not intended to be eaten, rather its suppose to serve as a unique historic memory.
The seller is not responsible for anyone who eats this hot dog.

Though I have been known to collect some crazy items in my day, this may take the cake as one of the craziest items I have ever seen. If nothing else, it was good for a laugh and put me in mind of the old episode of the Golden Girls where Rose and Blanche start an unofficial Elvis fan club. At one point they are all intrigued by a pork chop that was supposedly half eaten by the King himself.

If you would like to add this wiener to your collection you should act quickly… The auction will end in 1 day and 5 hours.

It is worth noting that no bids have been placed, but the auction has been viewed 4,887 times!