A collection of news and notes as the Penguins head into free agency and the JagrWatch comes to an end.

As a guy who watched Jaromir Jagr’s entire career from the moment he was drafted, I have to say that the thought of him coming back at this stage of his career is exciting. However, it is a tempered excitement. Though he has looked pretty damn good during two different International tournaments over the past year, there is no guarantee that he is going to be effective for an 82-game season and an extended playoff run. Sure he could be a valuable addition, but there are plenty of buts…

Can he stay healthy for the long haul? He has a history of lower body injuries. (Muscle pulls etc)

That’s a wild card. There are obviously no guarantees when it comes to injuries, though most seem to think he is in the (GULP) best shape of his career.

Is his heart really in a comeback to Pittsburgh?

It certainly appears to be. He has said and done all of the right things in expressing his desire to return to the Birds…however, I personally want to see it in action. It is one thing to say Mario Lemieux is your hockey idol and that you’d love to play with Sidney Crosby and Evgeni Malkin, while it is a completely different thing to actually live it.

Jagr would be entering a situation where he would be more of a complimentary player and maybe that would work for him at this stage of his career. It could work swimmingly, but it will definitely be something different for him as he has been “THE MAN” on each team he has played on since Mario Lemieux retired the first time. When that was disrupted upon Lemieux’s return in December 2000, it didn’t seem to sit very well with Jags. 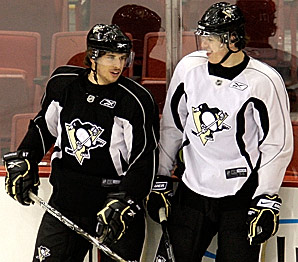 Most people I have talked to seem to think that he has grown an awful lot over the past 11 years and that he has the maturity that maybe wasn’t there during those early days. I don’t believe that he will be a problem in the room, in fact he would likely add to the leadership. Also worth noting that Shero wouldn’t even be considering this move had he not done the necessary homework.

Personally, I went from not caring much if this came to pass to hoping that it does. Jagr left town on fairly bad terms and having an opportunity for all involved to mend the fences is a pretty great thing. Though he isn’t going to be the long haired Tasmanian devil that we all remember, he is likely still going to be a pretty effective player. I

I just can’t see him coming back to the league unless he was serious at making a run at another Stanley Cup – while making significant contributions to said run.

Even if he is average five-on-five, who isn’t looking forward to a power play featuring Sidney Crosby, Evgeni Malkin, Kris Letang, (insert forward here) and Jaromir Jagr? It might take a few (20 attempts) to build the chemistry, but it could be lethal.

Regardless of where you stand on #JAGRWATCH, it will come to an end this afternoon as “Double J, Triple Excitement” is on his way to the United States as I type. He is set to land in New York City sometime around 3:30pm EST and a decision is expected within an hour of his landing.

It appears as if YOUR Stanley Cup hero, Max Talbot, is indeed done in Pittsburgh. The charismatic (possibly more valuable off the ice than on it) Talbot turned down a three year offer from the Penguins last week and is apparently seeking a four year deal worth roughly 2.0 million per on the open market.

He has made his intention to test the market on Friday very clear, so much so that he apparently had his agent beg out of a deal that would have sent his rights to the Leafs for a 5th round pick.

Max will forever live on in Penguins lore, but I for one have sort of been thinking he was going to go since prior to the Hossa deal. I really felt that he was a piece that Ray would end up dealing to acquire something else…  That day never came, but it was obvious from the moment he scored those two Cup goals that he likely priced himself out of the Penguins plans. Though those goals were huge, the on ice performance just hasn’t been there. Ray Shero knows that, while his peers are looking at the fact that they can add that charisma, along with a “clutch goal scorer.”

Well, yes, he is clutch in Game 7s of the Stanley Cup Final, but you just don’t play in enough of those games to warrant a huge compensation package… sorry, but it is time to move on. 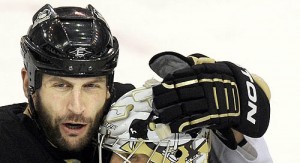 As the days roll on it is also starting to look like Mike Rupp might not be long for this world. Sure he loves it here and the team loves having him, but that doesn’t automatically mean he is worth $1.7 Million per.

The Penguins would love to keep him, but that type of deal for that player just doesn’t compute with the cap situation in Pittsburgh.

Rumors are circulating that the Penguins are shopping Mike Rupp’s negotiating rights and I can’t say that I blame Ray Shero for doing so. If you can’t come to a deal, might as well try to get something for your investment. It is also worth noting that this is likely a hardball tactic… you don’t like the deal, I’ll trade you. Sometimes that sort of thing pushes a guy to give a little back. We shall see…

Arron Asham on the Horizon?

When asked about Asham two days ago I was telling people that he was a goner. However that could be changing very soon. Word began circulating last night that Ray Shero had reached out to Asham’s camp to gauge interest in a comeback. My guess is that he was sort of a plan B for the Rupp situation, though we shall see.

Don’t rule out a Tyler Kennedy signing before Friday. Shero has made it clear that he would still like to come to terms with the young forward, mainly avoiding a tender offer so as to have a decision in the near future. An arbitration hearing likely would have been in the offing had the tender agreement gone through, which could have dragged the situation out until August.

Ray wants to know where he stands in the here and now… It is probably going to be tough for Kennedy, as with all of the Pens UFAs, to miss out on a possible huge payday on the open market. The cupboards aren’t very stocked this season and GMs will be looking to spend.

It should be a pretty interesting day in Penguinsland! Stay tuned…