Amber Alexander takes a look at Evgeni Malkin and tries to figure out which Geno will show up in 2010-11. 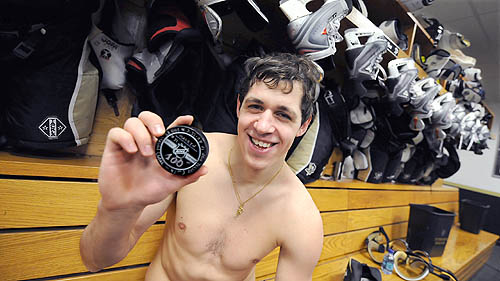 Evgeni Malkin is a hockey player who, on the outside, seems to be extremely shy and guarded. While Pen fans can say the exact opposite just by watching his play over the last few years.

And he’s leaves it all on the ice.

When Geno came into the league in the 05-06 season, he didn’t know a word of English. Thankfully, he had Sergei Gonchar to fall back on.

Following the season, Geno got hounded by the media for his inconsistency. His coach Dan Bylsma used the word “inconsistent” throughout the season, and even though Geno didn’t produce like he had done in the past, he still brought it on both sides of the puck.

Now that the 2010-2011season is right around the corner, fans are wondering which Geno we will see.

Gonchar has signed with the Ottawa Senators and will not be there for Geno as he has been in each of the past four seasons. The team has had its longest summer off-season in quite a while; some may have enjoyed the time off, while others let their competitive nature take over.

One thing this team does have is energy and competitiveness. They hate to lose.

We have all seen how they take a loss; they come right out the next game and give it their all.

With the additions of Paul Martin and Zbynek Michalek the defense will be primed to help Marc Andre Fleury get back into form.

Pen fans hate Arron Asham solely for the fact that he was a Flyer a year ago; but now that he is a Penguin, you’ll realize that he is a perfect fit. Coach Dan wants a hard hitting physical team.

This is a system built for Geno: physical offense.

With the rumors of Staal and Geno coming together on the second line, I see both players producing big numbers.

We all know what to expect from Sidney Crosby, he seemingly gets better every year he’s in the league.

I remember reading blogs about the fact that Geno will not want to be in Sid’s shadow forever and for as much as I believe Geno isn’t in that shadow, I know he is. But I also think he likes that.

Not as much pressure on him.

At the end of the day, one thing this team is, like I said, is competitive.

Geno is no different.

***Amber is a hockey fan from the deep south. She prefers a Penguins match-up over any College Football game and enjoys writing about hockey in general. A Journalism major, Amber is a news reporter for her local newspaper. You can follow her on twitter here.