FTP was invited to a media preview of the new and improved Dave & Buster’s here in Pittsburgh. It was a fun evening and well worth the time we spent on the dreaded Parkway to get there!

We have had a Dave & Buster’s location in Pittsburgh for quite some time and it has always been a great spot to get together with friends for some food, fun, and games. I had heard some rumblings that the Dave & Buster’s, located at 810 Waterfront Dr in Homestead, Pa was being remodeled but hadn’t had a chance to check out the changes.

Much to my surprise I was invited to a media preview of the new location that included food, drink and of course some of those previously mentioned games! Here is all you will need to know about Pittsburgh’s new and improved Dave & Buster’s.

D&B always had a fun vibe, but it was quite dark in spots and the set-up almost made you feel like you were walking through different quadrants. Well, say good-bye to that feeling as the remodel has opened things up significantly. You can now see straight into the bar area as you come through the doors, which makes it quite easy to locate friends if you are meeting them there.  As you move towards the bar area you can see the main dining area to your right and the smaller dining area to your left – sight lines to both were previously impacted by the building’s construction.

The areas are well lit and very clean and modern looking.

It is clear that D&B, which asked me to hash tag any tweets during my visit with a #DnBSports is interested in capturing Pittsburgh’s sports fans and as word slips out about the amount of televisions and sports packages that they have brought in they should have no problem doing just that.

There are 12 different satellite packages available including the NFL, MLB, and NBA. They also have NHL Center Ice, a variety of college packages and for you true football fans the Soccer Mix Channel. They also host events for most of the UFC pay-per-view events that are ultra popular these days.

There are televisions throughout the dining and bar areas, including three 15-foot-HD screens that look amazing. No matter what you are doing in the building you will have no problem following the game that you are watching. The 15-foot screens are nicely placed in areas where many can congregate to eat and drink. 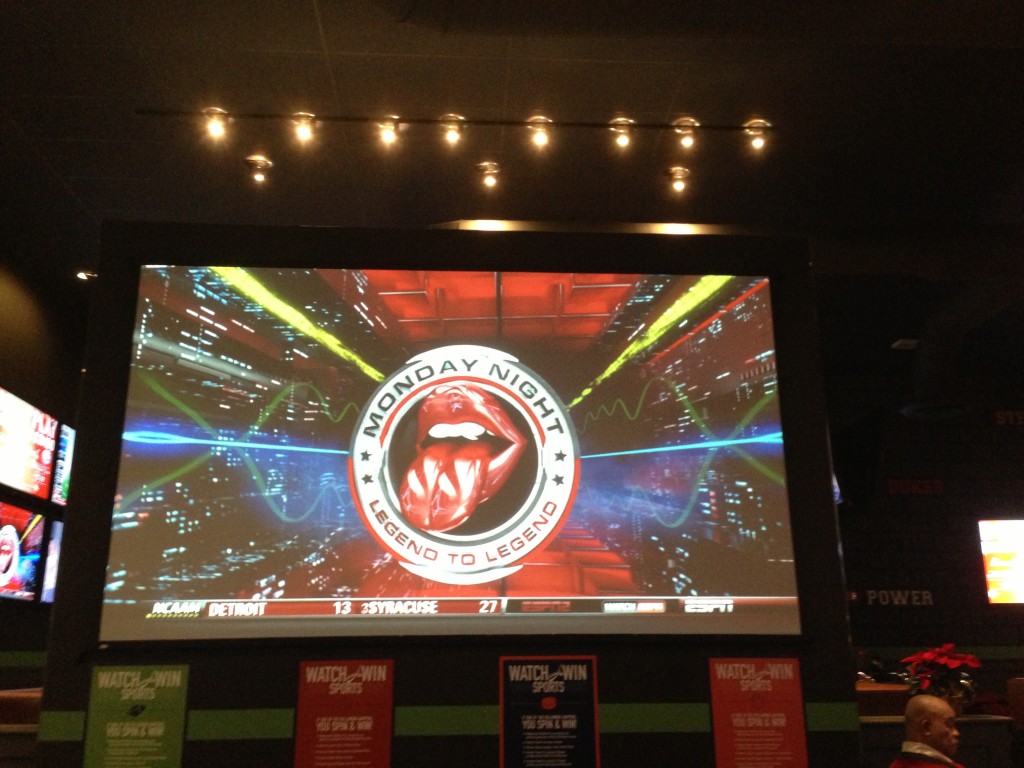 A new sound system has also been added so that you can hear every punch, kick, whistle, and grunt or tackle that you are seeing on the screens. We were only able to watch Sportscenter while we were there, but the sound was great.

One awesome feature in the main dining area is the “Watch, Spin and Win” wheel. A DJ/host is typically set up by the wheel to run the games and to play music and interact during commercial breaks of the big game.  The wheel comes into play on different occasions, but one of the most common during this time of year is during a score change in a football game. The DJ/host brings up a contestant to spin the wheel which is filled with food discounts, prizes, drink specials etc. The wheel can land on a prize for the individual, his table or the entire area. You have the power to win discounted food or drink for hundreds of raucous sports fans, so if you partake, make sure your spin is a good one.

The area also features a number of amazing pictures featuring Pittsburgh’s gone but not forgotten sports stadiums such as Three Rivers Stadium throughout the “Watch, Spin and Win” area.

If you are a fan of the Billiards and Shuffle Board tables that used to reside in these areas, don’t fret, as both are still available. They have just been shifted around a bit to accommodate the new design. In fact a number of Billiards tables were being converted to table tops for a holiday party that was scheduled.

Let’s be honest, most people who have gone to Dave & Buster’s in the past likely did so to spend some time in the Midway and those folks will still be able to enjoy themselves while those rabid sports fans are taking in the big game.

There are still plenty of old favorites available such as Skee Ball, Hoop Shot, and Tower of Power, but there are a number of new games available! Here are a few that stood out:

Dirty Drivin’ – a chance to knock fellow drivers off of an off road track with bombs, missiles or by whatever means necessary to become the first to cross the finish line.

Derby Owner’s Club – an amazing horse racing simulator that allows you to train and race your own thoroughbred race horse – you can save your statistics on your players card and compete with up to eight friends at one time.

Typhoon – a “ride” simulator. It is a bit pricey – 16.8 credits – but that gives two people a chance to experience the sensation of a wacky roller coaster, a runaway mine car or several other unique situations.

Ice Age – a ticket game that provides kids a chance to manipulate some of their favorite characters from the film series as they win tickets towards a multitude of great prizes.

Doodle Jump – straight from the smart phone in your pocket to the stand up console in D&B. You maneuver your “Q-Bert” like creature through several different realms in hopes of getting to the coveted “1,000 tickets” perch at the very top of each level — a very addictive game that keeps you coming back for more.

Super Trivia – a trivia game that allows you to compete with up to five other competitors. Topics in the game range from sports to science and are updated every two months.

As always, there are hundreds of other options in the Midway for the serious or not so serious gamer. You can also grab a table in this area to have a drink or some food. The Midway will probably be the most familiar feeling section of Dave & Buster’s for those who haven’t been there since the remodel.

As part of the remodel the menus for food and drink have been updated. Most of your favorites such as the build your own soft tacos and Lawnmower Salad are still available, but there are some new additions such as the Bistro Steak & Shrimp w/ Lobster Alfredo and Poppin’ Potatoes appetizer.

We started off with a couple of appetizers — the Poppin’ Potatoes and Soft Pretzel Bites. It was tough not to get the Pretzel Dogs since they look amazing, but with meals on the way, we figured it would just be a bit much. Sadly we misjudged the ones we got as well, as we were pretty much on the way to being stuffed before the entrée arrived. 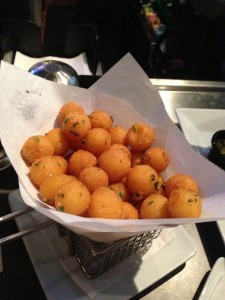 The Poppin’ Potatoes were definitely intriguing.  They are essentially fried mashed potatoes tossed in garlic and sprinkled with parmesan. We were told that each order contains 41 of these tasty morsels. The Soft Pretzel Bites were just what you’d think they were, but were also quite tasty.

When it came to entrees we each got and “Eat and Play” combo, which start at $15.99 for a meal and a $10.00 dollar player’s card. There are several combo price levels that change based on food and player’s card amount. I definitely suggest going this direction if you are eating and planning to play games.

We went with the Bistro Steak & Shrimp w/ Lobster Alfredo and a Peppercorn Sirloin Steak. Both meals were tasty, though the steaks were overcooked in both instances. Each was ordered “medium well” but arrived very well done.

D & B also has several drink features that are ongoing during the NFL season with the most popular being the Tailgate Tea, which features a blend of Jack Daniel’s Tennessee Honey, Southern Comfort, Sour Mix and Coca Cola.

Other football themed drinks such as The Late Hit, Red Shirt Freshman and Overtime Playmaker are also available.

The bar is full service with a nice combination of top shelf and mid tier liquors. If one thing jumped out from the pack at the bar it was the Beer Tower.

The name might have you thinking of a “yard of beer” or something very similar and you wouldn’t be very far off. The Beer Tower is essentially a gravity powered tap system that serves 2-4 people up to 100 ounces of your favorite barley and hops. The price varies based on the draft you choose and the amount of beer you order, but it was a very unique twist on the classic pitcher. The beer is kept cold by a frozen plug that fits in the bottom of the tower.

Overall I was impressed with the new and improved #DnBSports. There are a few things that are still being tweaked and updated but it would be a perfect spot to watch your favorite sporting event. The staff was courteous and friendly from the managers and bartenders on down to the guys who service the machines in the Midway.

The restaurant has partnered with the University of Pittsburgh and recently hosted the Jamie Dixon Radio Show that airs on 93.7 the Fan here in town. They also have University of Pittsburgh Football and Basketball ticket giveaways, the aforementioned UFC pay-per-views and NFL game day specials that make them a very affordable place to watch your favorite team in action.

I want to thank the managers and staff of Dave & Buster’s Pittsburgh for their hospitality, insight and attention while we toured and utilized the facility. We will definitely be back in the future.

Check the rest of my pics from DnBSports by clicking here!