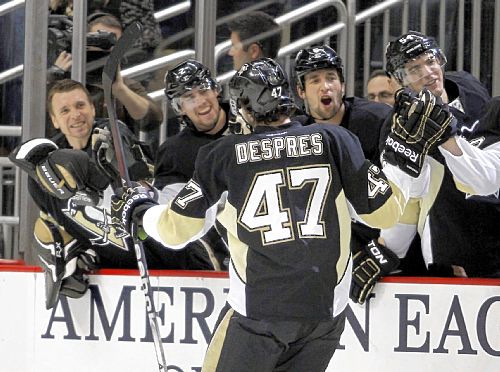 Is Simon Despres on the trading block? Some respected newspaper guys think so!

By making defenseman Simon Despres a healthy scratch last night in Winnipeg, the Penguins stirred up the rumor mill quite a bit and the speculation about Despres’s availability is running wild.

Both the Tribune Review and Philly Daily News talked about Despres being on the trading block. This speculation goes back to last season when I had heard around several hockey circles that the former Memorial Cup star would be available in the right deal.

That never came to pass, but it seems that it is again the case. Here is a sampling of the speculation…

First my colleague over at the Penguins’ Radio Network and beat reporter at the Tribune Review, Rob Rossi, weighed in via his chipped ice blog yesterday:

Hearing a lot of rumblings about the Penguins looking for a winger. Nothing close yet, but know that D Simon Despres can be had for the right price. Question becomes is that price a veteran winger with a short-term future or if the scouting staff has identified the next James Neal and now GM Ray Shero is set on trying to bring said player to Pittsburgh.

Shero has twice (Ryan Whitney, 2009; Alex Goligoski, 2011) traded young defensemen for long-term fit wingers (Chris Kunitz, Neal). Each time he has made that move before the trade deadline, and in February.

Shero has been stockpiling young defensemen almost since the moment he arrived in Pittsburgh. Yes they feed the pipeline, but they are also fodder for bringing in other things you need, as Rob points out above.

Next up, Frank Seravelli of the Philadelphia Daily News, mentions Despres as a possible target for the Flyers who are very banged up right now.

The Flyers can trade for a defenseman. In Pittsburgh, Simon Despres seems to be available. Despres has failed to impress in the early goings this season, and word is circulating in the rumor mill that Ray Shero may be willing to part with him. Despres (day-PRAY) is a 1st round pick (2009, 30th overall) and might be a nice piece moving forward in a new system. He’s 6-foot-4, 220 pounds, is a smooth skater and moves the puck well.

These guys don’t report on the availability of a player unless they are indeed hearing talk about it. As I said, it isn’t shocking, as he was a guy that could have been on the move last year.

Keep your eyes on this one Pens fans, as it could be the kind of move that solidifies this line-up, or it could be a bunch of nothing.