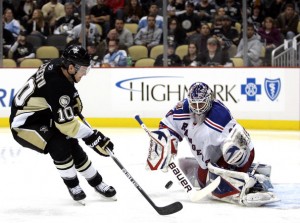 If shipping Dustin Jeffrey and Steve MacIntyre to Wilkes Barre-Scranton didn’t open up room for Sidney Crosby and Tyler Kennedy to return, trading Mark Letestu to the Columbus Blue Jackets certainly has.

Letestu was essentially the odd man out after not coming close to the level of play that earned him a contract extension last season. He produced just 1 assist in 11 games this season and registered a minus-6. It is also worth noting that he had seemingly been replaced on the depth chart by Joe Vitale, who proved to be a better option for the Penguins on the fourth line.

When the line-up was completely healthy, Letestu would likely have been placed on waivers. He wouldn’t have cleared, as everyone saw him score 27 points one season ago. Some might feel that the Penguins could have gotten a bit more for Letestu, who scored 14 goals in 2010, but it was one of those situations in which you take the best offer rather than lose the player for nothing. In this situation, Ray Shero acquired a 4th round pick, but isn’t too shabby for a guy who looked a lot slower and a lot less skilled than one year ago.

Letestu will get more opportunities to show what he can do in Columbus and will not find himself buried on a depth chart behind some of the finest centers in all of hockey. Sure they have Jeff Cater, Derick Brassard and Ryan Johansen, but Letestu should have no problem sliding in on the third or fourth line. He could also play the wing if need be. It ends up being a win/win situation for all involved.