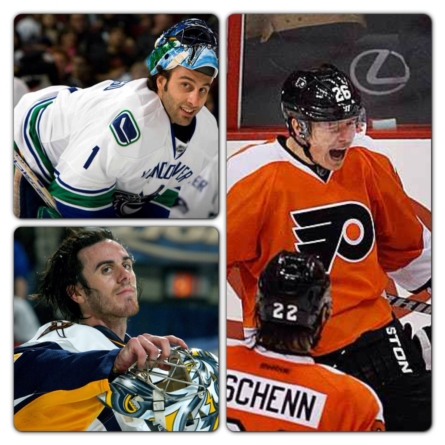 As we all know, the NHL has a handful of “holidays” throughout the year. The biggest of which is probably the first day of free agency, but the league’s trade deadline is right up and there may even carry more weight as it is the final chance for teams to tweak their teams as they head down the stretch and into the playoffs.

While Pittsburgh, Boston, Vancouver and St. Louis revamped, reloaded and or added too teams that were already very formidable, some others might be looking to squeak in under the wire with last minute moves.

Though we likely won’t see any huge names move, there is a chance that could change.

Ryan Miller, Roberto Luongo, Ben Bishop and Miikka Kiprusoff are all swirling in the trade winds, but probably make more sense to move over the summer.

Nick Cotsonika from Yahoo sports speculates that Ruslan Fedotenko’s name is circulating. The former Penguin would be an intriguing pick-up for a contender, based on his history of clutch performances during the Stanley Cup Playoffs and two Cup rings.

Another interesting situation that seems to be developing is the fact that the Columbus Blue Jackets could be in the hunt for a scoring winger. If I was a betting man, I would look directly at the St. Louis Blues and power forward Chris Stewart. New Blues GM Jarmo Kekalainen and team president John Davidson are very familiar with the player and the Blues may want to move some salary to open space to keep Jay Bouwmeester around moving forward.

Here in Pittsburgh, things may be quiet. The Penguins made their significant moves over the past two weeks, acquiring Jarome Iginla, Brenden Morrow and Douglas Murray. There is speculation that Ray Shero might still do some tinkering, especially in light of the fact that Sidney Crosby, Paul Martin and Kris Letang are all currently out of the line-up.

If I had to guess, I could see a depth defenseman being on the radar, but the “biggest” move could come in the form of a checking forward in the mold of Boyd Gordon or Marcel Goc — a player who can come in and win big face0ffs for the team. They again came up on the wrong side of the faceoff battle last night and have struggled in that department more times than not this season.

The Atlantic Division could be a busy one today. The Flyers and Islanders have their sites set on locking up the final playoff spot in the east and may look at a move today as one that could situate them to get into the dance. The Devils also are expected to be in on some minor moves this afternoon.

The Southeast battle got a bit more interesting last night as the Hurricanes lost a huge game to the Capitals, giving the latter a ton of life. The Capitals may look to bolster their strong play as of late with a move, while the Canes could be a darkhorse for one of the goalies, based on the fact that they can’t have a strong level of confidence in Dan Ellis/Justin Peters.

The Canes also lost Joni Pitkanen last night, though speculation is that he was being shopped anyway after the acquisition of Marc-Andre Bergeron from the Tampa Bay Lightning.

The best “need” get for a contender to this point was probably Vancouver’s acquisition of Derek Roy, who immediately steps in and centers the team’s second line.

The Bruins went big with a move to grab Jaromir Jagr from the Dallas Stars, something that wasn’t all that unexpected after they lost out on Iginla.

Though the day could be a long slow deadline, it will still be exciting as it always is.

11:57am — Two interesting developments to report. First, according to Darren Dreger of TSN, it looks like Kiprusoff will stay in Calgary and retire at the end of the season, thus taking him out of play for the day. Leafs media immediately begin to kick around the idea of acquiring Nik Khabibulin. Intriguing…

Second, defenseman Jack Johnson has apparently left the ice during Columbus Blue Jackets practice, which has most speculating that he could be on the move. As mentioned earlier the Jackets are apparently in the market for scoring…

Best tweet on the situation comes from our pal Adam Gretz, from CBS Sports Eye on Hockey Blog —

Maybe Jack Johnson just really had to go to the bathroom.

12:11pm – The well traveled Adam Hall is on the move again. The checking forward was claimed on waivers by the Philadelphia Flyers according to Pierre Lebrun.

Also, rugged, veteran D-man, Scott Hannan is on his way back to the San Jose Sharks for a mid-round draft pick… speculation says it is a fifth rounder.

The trade actually goes through with San Jose giving up just a conditional sixth/seventh round pick.

So in essence they acquire two second rounders from the Penguins for Douglas Murray and get a player who brings very similar qualities for a conditional final round pick. That is great work by an astute GM in San Jose.

12:56pm – Sportsnet panel says things beginning to open up a bit and it all starts with this monumental move…

Jerred Smithson from FLA to EDM for a draft pick, believed to be a fourth round pick. #tradecentre

Yes, I just mentioned Sportsnet and used a tweet from TSN’s Bob McKenzie — I do what I want!

The funniest moment of the day was watching the Sportsnet panel try to talk about this trade as if it will have any impact at all.

2:37pm – A number of deals are starting to break, so let’s get right through them…

First off, the Penguins have acquired Jussi Jokinen. You can read thoughts on that one elsewhere on this site…

The Tampa Bay Lightning get their “next” goalie of the future in the form of the Senators’ Ben Bishop. They pay a steep price in the form of rookie sensation Cory Conacher and a fourth round pick. It is a bit of a shock to see the Lightning giving up Conacher, but they needed a goalie and they get a good one in Bishop. They also have Brett Connolly on the horizon, which gave them some latitude in the forward ranks.

The Flyers grab themselves a goalie who may actually be able to play some games for them and give Ilya Bryzgalov a break. They send a mid-round draft pick the other way. Interestingly enough Mason was made expendable by the acquisition of Sergei Bobrovsky… from the FLYERS.

One of the biggest deals of the day thus far involves the Blue Jackets again… they were in the hunt for a scoring winger and they got one in the form of Marian Gabroik. Heading back to the Rangers — defenseman John Moore, C Derick Brassard and forward Derek Dorsett. If the Jackets can harness the ability of Gaborik, they are going to have themselves a dangerous player. I am guessing that they will be able too, or else JK and JD wouldn’t have made the deal.

2:46pm – The Sabres fire sale continues — they send Jason Pominville to the Minnesota Wild in exchange for prospects forward Johan Larsson and goalie Matt Hackett. This should be a deal that helps both sides. Pominville will be a great get for Mike Yeo and Chuck Fletcher, while Hackett gives the Sabres a goaltender who isn’t far away from stepping into the NHL. That opens up the door for a Ryan Miller deal at some point in the future…

There are some additional components to some of these deals, but they are just slipping out… mainly involving picks etc. Check out the official TSN Trade Tracker for updates as they happen…

3:00pm – The deadline is upon us — what will trickle in? Word is that Luongo was pulled from the ice during practice this afternoon. Could he be on the move? We shall see…

If not, the deadline passes with just nine deals. A low total to say the least.

Raffi Torres goes to the San Jose Sharks for a third round pick… helps bolster some of the toughness they lost in Ryane Clowe.

3:16pm – Looks like the Toronto Maple Leafs might have acquired Ryan O’byrne from the Colorado Avalanche. Confirmation forthcoming.

Any additional trades will be discussed in a new blog/thread…