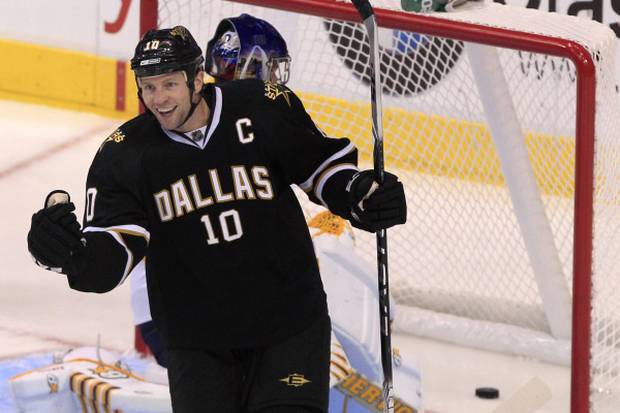 The Penguins acquire Brenden Morrow + 3rd round pick from Dallas for Joe Morrow + 5th round pick.

With the Jarome Iginla sweepstakes heating up, it seems that Penguins’ general manager Ray Shero was content to pull the trigger on something that he could close today.

Shero got on the horn to his old buddy Joe Nieuwendyk and reeled in Brenden Morrow. You may remember a little deal he pulled off with Dallas a few seasons ago that netted him James Neal and defenseman Matt Niskanen.

Morrow, the Stars captain, has been in Dallas since being selected 25th overall by the team back in 1997. He has scored 20 or more goals seven times over his career, including a career high 33 back in 2010-11, but has just 11 points (6G) this year.

If Morrow, the forward, finds a way to revitalize his career playing with one of the Penguins’ three talented centers, this deal could be a steal for the Penguins. However, they did give up a very valuable prospect in Morrow, the defenseman.

The younger Morrow has struggled a bit in his transition to the pro game and just 15 points (4G) in 57 games with Wilkes-Barre/Scranton of the American Hockey League this season. He also found himself on the depth chart next to a number of other blue chip type defensive prospects such as Simon Despres, Derrick Pouliot, Olli Maatta, and Scott Harrington.

Shero has a long history of moving parts from the backend for forward help, something that he has done with Ryan Whitney and Alex Goligoski. Though those trades brought in players who would end up contributing long term, this is of the “win now” variety.

Morrow, the forward, is an unrestricted free agent following the season. Many are comparing the acquisition to that of Bill Guerin back in 2009, which led to a Stanley Cup victory that spring.

Can this deal pay those dividends? Time will tell.

Morrow brings leadership, pucks skills and toughness. He has the ability to play with talented forwards and those who are expected to grind the opposition down. Look for him to play a variety of roles with the Penguins including skating on the Penguins second line and on the power play, where he averaged 2:44 TOI for the Stars this season.

There could be other moves coming, which will make for an exciting ten days leading up to the league’s April 3rd trade deadline.