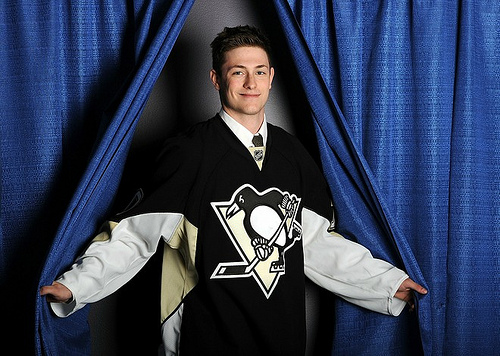 The Penguins have signed 2010 fourth-round pick Tom Kuhnhackl to a three year entry level deal. Here are the pertinent details about Kuhnackl from the Penguins news release:

He is in his first season with Windsor of the Ontario Hockey League. He’s posted 39 goals and 68 points in 63 games with the Spitfires. Kuhnhackl’s 39 goals rank 13th in the OHL, while his 15 power-play tallies are the sixth (tied) best mark in the league.

Kuhnhackl played for Team Germany in the 2011 World Junior Championships in Buffalo, N.Y., scoring one goal in six games.

Kuhnhackl (6-foot-2, 192 pounds) played 38 games for Landshut in 2009-10, recording 12 goals and 28 points. He added four goals and six points in five games with Team Germany at the World Under-18 Championship.

Kuhnhackl comes from a family rooted in hockey tradition. His father, Erich, was elected to the International Ice Hockey Federation Hall of Fame in 1997 and was named the German hockey player of the century in 2000. Kuhnhackl’s brother and sister also played hockey in Germany.