The Penguins have signed defenseman Boris Valabik to a one-year deal. 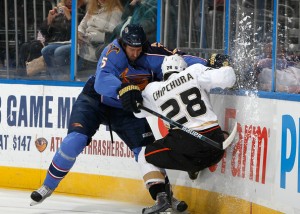 Though a holiday weekend is in full effect in the United States, Penguins general manager Ray Shero is still working to craft his 2011-12 roster and he brought in another body today. Shero signed defenseman Boris Valabik to a one-year contact that will pay him $550,000 at the NHL level. However, I would suspect that Valabik will spend most of his time in Wilkes Barre-Scranton unless the Penguins again are forced to deal with some injuries.

Valabik, who was selected by the Atlanta Thrashers 10th overall back in 2004, has played 80 NHL games between 2007 and 2010, in which he recorded 7 assists and 210 PIMs. The native of Nitra, Slovakia was traded to the Boston Bruins organization last season along with Rich Peverly.

Valabik has spent the majority of his pro career with Chicago (AHL). Overall, Valabik has appeared in 184 AHL regular-season games, notching 31 points (4G-27A) and 633 penalty minutes. He was a vital member of the Wolves’ 2007-08 Calder Cup championship squad, scoring three goals and four points in 24 postseason contests.

Many may remember the big deal that was made a couple seasons back when an errant Sidney Crosby punch hit Valabik in a bad spot during a net-front scrum. Folks around the league went nutso…no pun intended… over the “cheap shot.”

That incident aside, Valabik should be a nice depth addition to the organization. Especially based on the fact that he will be used most often in WBS as mentioned above.

Here is the official release by the team:

The Pittsburgh Penguins have signed defenseman Boris Valabik to a one-year contract, it was announced today by executive vice president and general manager Ray Shero.

Valabik, 25, split the 2010-11 season between the Chicago Wolves and Providence Bruins of the American Hockey League (AHL), notching 11 assists and 189 penalty minutes in 59 regular-season games between the teams.

Valabik, a 6-foot-7, 245-pound blueliner, began this past season as a member of the Atlanta Thrashers organization while suiting up for Chicago of the AHL. On Feb. 18, Valabik was traded to the Boston organization in a deal that also brought forward Rich Peverley to the Bruins in exchange for forward Blake Wheeler and defenseman Mark Stuart.

A native of Nitra, Slovakia, Valabik was selected by the Thrashers in the first round (10th overall) of the 2004 NHL Entry Draft. Valabik spent parts of three seasons skating with the Thrashers from 2007-10, collecting seven assists and 210 penalty minutes in 80 NHL games.

Valabik has spent the majority of his pro career with Chicago (AHL). Overall, Valabik has appeared in 184 AHL regular-season games, notching 31 points (4G-27A) and 633 penalty minutes. He was a vital member of the Wolves’ 2007-08 Calder Cup championship squad, scoring three goals and four points in 24 postseason contests.

Prior to joining the Thrashers organization, Valabik played three seasons of junior hockey with the Kitchener Rangers of the Ontario Hockey League (OHL). Valabik played 163 regular-season games with the Rangers, amassing 29 points (4G-25A) and 725 penalty minutes. He added two assists in 25 postseason games.