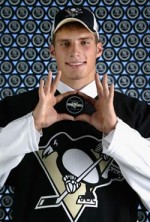 Ray Shero wasn’t done after inking goaltender Brent Johnson to a contract extension this morning. The Penguins general manager got to work on a couple of prospects and inked both defenseman Carl Sneep and goaltender Patrick Killeen to entry level contracts.

Sneep is coming off of a stand out season with Boston College, in which he helped lead the Eagles to the National Championships. Sneep set career highs this season in goals (11), assists (17), points (28), plus-minus rating (+9), power play goals (6) and shorthanded goals (2). His 28 points led all BC blueliners. 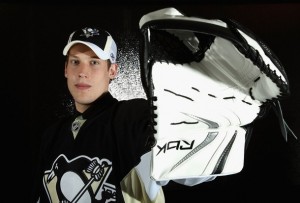 Killeen just finished his fourth season with Brampton in the Ontario Hockey League and set career marks with 63 appearances, 23 wins, 2.42 goals against average, .913 save percentage and 5 shutouts.

Killeen is already with Wilkes Barre-Scranton, but I have yet to hear if Sneep will report for the WBS playoff run.

Missed the obvious first line in the press release stating that the contracts will take effect at the start of the 2010-11 season! D’oh! Thanks to @Ozman_51  for pointing that out.

Here is the official announcement…

The Pittsburgh Penguins have signed defenseman Carl Sneep and goaltender Patrick Killeen to entry-level contracts that begin for the 2010-11 season, it was announced today by executive vice president and general manager Ray Shero.

Sneep, 6-foot-3, 212 pounds, is coming off of his second NCAA National title with Boston College following the Eagles’ 5-0 defeat of Wisconsin at Ford Field in Detroit on April 10. He also won the title in 2008 with the Eagles as a sophomore.

Sneep, the Penguins’ second-round pick (32nd overall) in the 2006 NHL Entry Draft, has played four seasons with Boston College. In that span, the Nisswa, Minnesota native has compiled 17 goals, 47 assists and 64 points in 157 contests.

Killeen, who is currently with the Penguins’ top minor-league affiliate in Wilkes-Barre/Scranton of the American Hockey League, just completed his fourth season with Brampton of the Ontario Hockey League. In four seasons with the Battalion, Killeen posted a 63-48-7-10 record, 2.74 goals-against average, .902 save percentage and eight shutouts.