The Penguins ink Steve Sullivan to a 1-year deal. 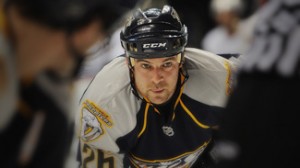 Though the past couple of days have been filled with Ray Shero dealing with his own free agents and #jagrwatch, he finally ventured into the NHL’s free agency pond and came out with a catch that he liked.

Steve Sullivan has inked a one-year deal with the Penguins that will pay him $1.5 million dollars.

Personally I have always been a fan of Steve Sullivan. My biggest concern is that he is healthy and will be able to handle the riggers of another full NHL season. He had an effective year for Nashville this past season…

He has always had speed, great hands and the ability to finish. Ray Shero seems to be drawn to the fact that he is a right handed shot and could benefit the power play. All indications are that he is also an all around great human being — good in the room and a good leader.

Steve Sullivan is also willing to interact with you all out there via his twitter account: sullivan26.

He used it to essentially break the news of his signing earlier:

Looking forward to my new start in the Steel City!

I will have more soon…

Here is the official release from the team.

The Pittsburgh Penguins have agreed to terms with forward Steve Sullivan on a one-year contract, it was announced today by executive vice president and general manager Ray Shero.

Sullivan, 36, has spent the past five seasons with the Nashville Predators. The veteran forward appeared in 44 games this past season for Nashville, collecting 10 goals, 12 assists and 22 points. He added three points (2G-1A) in nine postseason contests.

A 5-foot-9, 161-pound forward, Sullivan missed the entire 2007-08 season due to a severe back injury, before returning triumphantly on Jan. 10, 2009. Sullivan finished that season by recording 32 points (11G-21A) in 41 games and winning the Bill Masterton Memorial Trophy for his perseverance, sportsmanship and dedication to hockey.