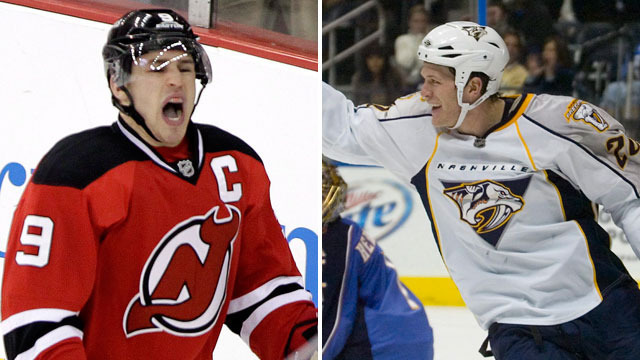 Penguins lose out on Parise and Suter.

It’s over. #PariseWatch has finally ended and just like Marian Hossa and Jaromir Jagr before him, he has opted to tell the Penguins thanks, but no thanks.

Zach Parise, who has been the subject of just about every tweet, facebook post and news sports report that you have likely seen since last weekend has opted to join the Minnesota Wild. He won’t be the only one either, as Ryan Suter, the marquee defenseman on the market has also come to terms with the Wild.

There was speculation last week that the duo could end being a package deal, but the script changed as the gun fired to kick off the free agent frenzy on Sunday at noon. Talk circulated that the Penguins had gone hard after Parise, while the Detroit Red Wings had done the same with Ryan Suter. Most pundits thought that was how it would play out…

As the process dragged on and Parise boarded a plane for Minnesota on Tuesday morning the whispers started to change a bit – the Wild were major players in the situation. Word broke that they had upped their offer to Parise and sent a contingent of top brass into a face-to-face meeting with Ryan Suter.

Josh Rimer, of NHL Home Ice, Sportsnet and NextSportsStar.com, secured an exclusive one-on-one interview with Parise last night and the writing began to appear on the wall. Not only did it seem that Parise could be leaning the direction of the Minnesota Wild, but he let slip that he had talked to Ryan Suter throughout the process and that he would “love to play on a team with a defenseman like Suter.”

As the noon hour hit on the July 4th holiday in the United States both camps started notifying the teams on their short list that they had been eliminated. According to multiple reports, the Penguins received calls from both.

As they were waiting for this process to play out, the team watched Steve Sullivan sign a 1-year contract with the Phoenix Coyotes and saw many other UFA targets join other teams. The entire process has got to leave Ray Shero and the Penguins’ organization a bit chaffed, as they again end up a bridesmaid in a very high profile UFA situation.

Keep in mind that when Rob Rossi of the Tribune Review laid out the Penguins’ blueprint last week, he mentioned that they team would be major players for the two big fish, but that Ray Shero also had contingencies in place. It would appear that the time for contingencies is now and judging by the swiftness with which he dealt with the Jordan Staal situation, he is likely enacting “Order 66” as we speak.

The most likely scenario would see the Penguins making a trade to fill the slots that they had earmarked for Parise/Suter, but there are also some intriguing names still available in the UFA market, though none of them bring a game similar to the big two.

Though the United States is on holiday, stay tuned, as it could be a pretty wild ride the rest of the day.