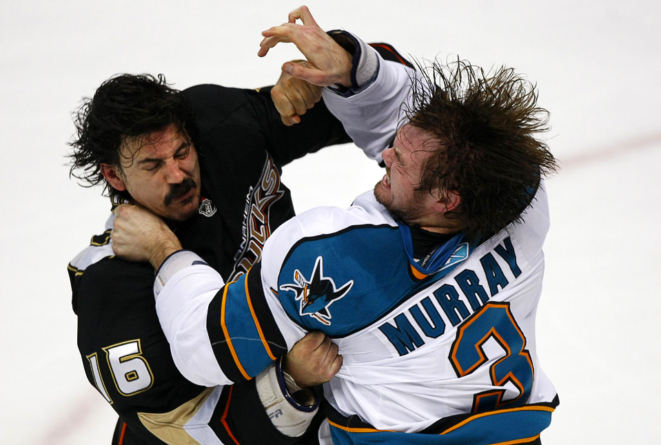 The dust has barely settled on the Brenden Morrow deal, but that didn’t keep Ray Shero from getting back to work this afternoon.

“I think with Doug Murray what we were looking for was a bigger more physical guy,” Shero said.

Murray isn’t the flashiest of defensemen, but he uses every inch of his 6-foot-3, 245-pound frame to make life uncomfortable for opposing forwards. He isn’t afraid to play a physical style, as evidenced by his 56 hits. He has blocked 64 shots this year and has logged three assists.

Where Murray will end up being most effective is on the penalty kill, where he averaged 2:53 TOI for San Jose. It is worth noting that the Sharks possessed the league’s fourth ranked PK and Murray was a bit part of that. He’ll do good work in bolstering the Penguins’ 20th ranked unit.

Though his name doesn’t sound it, Murray actually hails from Bromma, Sweden. He has played his entire career with the Sharks and posted career highs in games played (79), goals (4), assists (14) and points (17) back in 2009-10.

This deal, as with the Morrow move last night, are of the win now variety.

Shero found himself in the unique situation of having a significant amount cap space, which translates into the ability to add rentals.

The prices were steep for each, but as Shero said last night and again this afternoon, “I don’t set the prices, I decide if I want to pay them.”

He was comfortable moving a guy like Joe Morrow based on organizational depth at the position. He was also comfortable in moving two draft picks for Murray, as it was in tune with the going rate for rental defensemen.

It is also worth noting, that Shero was more comfortable moving two second round draft picks based on the fact that the team had five picks through the first three rounds last summer (2- first rounders, a second, 2 -third rounders).

The Penguins also acquired a third round pick in the Morrow deal, giving them two in the round this summer.

The move for Murray feels a lot like the one that brought Hal Gill to town back in 2008, though Shero pointed out that Murray is probably in possession of “more of a physical edge and meaner” than Gill.

With the trade deadline still a week away, the Penguins have made the first big splash. Are they done? Conceivably so, but it wouldn’t be surprising to see Shero find a way to graft a forward onto the roster to bolster the fourth line – think something like Florida’s Marcel Goc.

Done or not, the next week will be interesting as we see what the rest of the Eastern Conference does in hopes of keeping up with the Joneses or in this case the Penguins.