The Penguins have re-signed forward Dustin Jeffrey to a two-year contract. 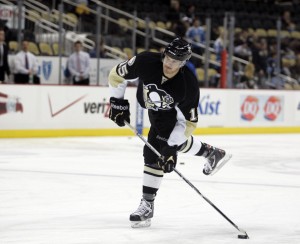 The Penguins have locked up another of their own free agents. The team has inked Dustin Jeffrey to a two year extension which will pay him $575,000 dollars annually at the NHL level. The first year of the contract is a two-way one, but will revert to an NHL only deal during year two.

Jeffrey, who has taken many different steps over the past couple of seasons to get to this point, showed that he could be a very valuable contributor at the NHL level last season. Unfortunately his season was cut short by a knee injury on March 24 at Philadelphia.

Prior to his injury, Jeffrey was coming off of a pair of multiple-point efforts over his previous eight games, including the first two-goal performance of his NHL career March 5 at Boston. Jeffrey’s second goal that night was the overtime game-winner.

The Sarnia, ON native was one of the bigger surprises last season and is expected to compete for a role on the parent club next season. Jeffrey reinvented himself as a winger two seasons ago and got some great offensive results, adding that to his already impressive arsenal of taking face-offs, being able to play the center position and killing penalties makes him very versatile. He can fill in just about any situation and is a prime example of the kind of versatility that Ray Shero seems to look for in the guys he keeps in this organization.

Here is the official release from the team:

The Pittsburgh Penguins have re-signed forward Dustin Jeffrey to a two-year contract, it was announced today by executive vice president and general manager Ray Shero.

Jeffrey, 23, is coming off a season where he saw the most extensive NHL action of his professional career. The 6-foot-1, 205-pound forward established NHL career highs across the board in games played (25), goals (7), assists (5) and points (12) before his season was cut short due to a knee injury March 24 at Philadelphia.

Prior to his injury, Jeffrey was coming off of a pair of multiple-point efforts over his previous eight games, including the first two-goal performance of his NHL career March 5 at Boston. Jeffrey’s second goal that night was the overtime game-winner.

A Sarnia, ON native, Jeffrey has spent parts of the past three seasons with Pittsburgh, collecting 15 points (8G-7A) and a plus-9 rating in 40 career NHL games since being drafted by the Penguins in the sixth round (171st overall) of the 2007 NHL Entry Draft.

Jeffrey played a majority of the first half of the 2010-11 season with the Penguins’ top minor-league affiliate, Wilkes-Barre/Scranton of the American Hockey League (AHL). Jeffrey appeared in 40 games with WBS, posting 17 goals, 28 assists, 45 points and six shorthanded tallies. Those numbers earned him his second consecutive AHL All-Star Game invitation, although he didn’t play because he had already been recalled by Pittsburgh.

Jeffrey has played three-plus seasons with WBS since joining the team during the 2008 AHL playoffs, helping them earn a berth in the Calder Cup Finals that spring. He has appeared in 180 regular-season games with WBS, posting 52 goals, 101 assists, 153 points and a plus-26 rating. He’s added 14 points (7G-7A) in 31 postseason contests.

During his final two junior seasons with Sault Ste. Marie, Jeffrey posted back-to-back 90-point seasons. In 2007-08, Jeffrey ranked eighth in the OHL with 59 assists and ninth with 97 points.