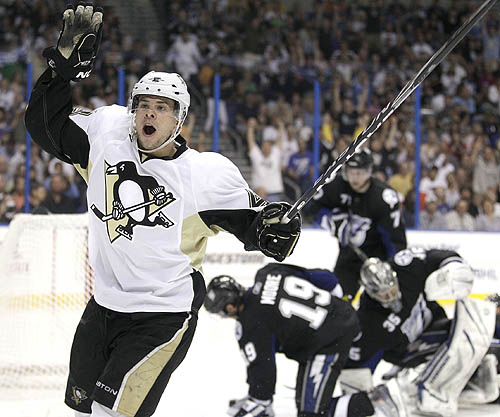 We thought a change was gonna come yesterday and it did indeed occur today.

While most are still wallowing in the Penguins’ loss to the Maple Leafs, the team itself was back at it today on the ice at the CONSOL Energy Center.

Practice wasn’t the only thing on tap this morning as both Head Coach Dan Bylsma and General Manager Ray Shero were busy working the chalkboard and the phones respectively. Bylsma was tinkering with the bodies that have made up his line-up for the past three games, while Shero was busy pulling the trigger on two trades.

Shero sent Wilkes-Barre/Scranton defenseman Carl Sneep to the Dallas Stars for a conditional draft pick, opening the door for former Penguin Mark Eaton to sign a contract with the organization. Eaton was inked to a professional tryout yesterday.

The Penguins’ top boss then shipped utility forward Ben Ferriero to the New York Rangers in exchange for forward Chad Kolarik. Kolarik has posted 35-points (16g,19a) in 41games for the Connecticut Whale this season.

Here is the official write up on Kolarik from the Penguins:

The 5-foot-11, 185-pound Kolarik has ranked among the top scorers in the AHL all season. He currently places 13th (tied) in the scoring race with 35 points (16G-19A) in 41 games. Kolarik’s 16 goals and seven power-play tallies both lead the Whale.

Could he be a candidate for some time on a Malkin/Neal line? He has had several seasons in which he had some offensive success at the American Hockey League level. That question will have to wait for an answer, but Dan Bylsma certainly added some intrigue to the possibility during the team’s practice today.

Bylsma shuffled his lines a bit, with the most significant move being the promotion of Tyler Kennedy to the Malkin/Neal line.

Eric Tangradi, who had been skating with Malkin/Neal was dropped to the fourth line, while Tanner Glass was inserted in the third line spot vacated by Kennedy.

The Penguins get back to work tomorrow night, as they travel to Winnipeg to take on the Jets in chilly Manitoba.