The Penguins today announced the signing of a one year contract extension with defenseman Deryk Engelland. 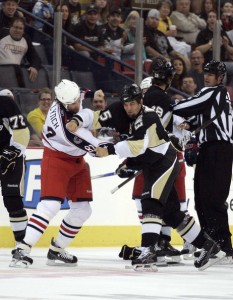 The Penguins today announced the signing of a one year contract extension with defenseman Deryk Engelland. Based on his contributions this season, Engelland will be an intriguing name to watch come training camp, especially with the possible departures on the parent Penguins blue-line.

Here is the official release from the Penguins…

The Pittsburgh Penguins have signed defenseman Deryk Engelland to a one-year contract extension, it was announced today by executive vice president and general manager Ray Shero.

The new contract goes into effect at the start of the 2010-11 season. The deal is a two-way contract and will pay Engelland $500,000 at the NHL level.

Engelland, 28, made his NHL debut this season with Pittsburgh recording two assists and 17 penalty minutes in nine games during a November call up. He played his first career NHL game at Boston on Nov 10. Engelland posted his first career point (assist) Nov. 16 against Anaheim. He also had a plus-3 rating against the Ducks.

The 6-foot-2, 202-pound defenseman played the majority of the season with Wilkes-Barre/Scranton, putting up 11 points (5G-6A), a plus-10 rating and 121 penalty minutes in 71 contests. He added an assist in four postseason games.

Engelland has been a steady presence on the blue line for WBS, appearing in all of the club’s 160 regular-season and 35 postseason contests in his first two seasons after signing with the team in July, 2007. His streak was broken this year when he missed nine games while playing in the NHL with Pittsburgh.

The six-year pro has paid his dues with stints in Las Vegas, South Carolina and Reading of the East Coast Hockey League (ECHL), and Lowell, Hershey and Wilkes-Barre/Scranton of the AHL.